Starting with one of Bach’s Flute Sonatas namely, in C Major BWV1033, the mood was immediately and irrevocably set with the calm ease and intellectual understanding of a marvellous work. The work falls into four movements, in something of the chamber sonata style but without explicitly naming any dance patterns until the end. The brief first movement is officially a Presto, although it begins with a more measured Introduction. The flute played nonstop throughout, and when it launched into the cadenza-like Presto proper, the continuo player measured up to the demands made of him by the score. The second movement was an Allegro, a bright little moto perpetuo piece with a chugging accompaniment. The first theme, played twice, is answered by a related tune, also repeated. The serene and delicate Adagio often sends the flute into the upper reaches of its range, though without exceeding the Baroque flute’s natural compass, as Bach requires in his E minor and B minor Sonatas. Finally, a pair of graceful Minuets shows up; typically for this format, the second is capped by a terse repeat of the first.

The second piece on the programme was Mozart’s Sonata no. 6 in G Major KV11, an early work that, however, does not diminish the quality and difficulty that one automatically associates with Mozart. The work showed the precious genius’s understanding of the potential inherent in the pianoforte as he gives the expected principal weight to the keyboard instrument in the opening Andante. The flute added its own rhythmic figure at the start of the second section, now echoed by the keyboard in an eight-bar section, after which the opening theme returned. The Allegro that followed found an opportunity for strong dynamic contrasts, and returns after the G minor Menuetto. Throughout, the flutist and pianist manifested a profound rapport based on mutual understanding and the result was a seamless fabric with no beginning or end.

Perhaps the pièce de resistance of the evening was Schubert’s massive theme and variations on his tune ‘Trockne Blumen’, which is, in fact, the melody of the 18th song of his wonderful song cycle Die schöne Müllerin. This Introduction and Variations on Trockne Blumen in E minor D. 802 apparently grew only from Schubert’s own notion to further explore his song’s melody and not from any special practical impetus, so, the inspiration was purely artistic.

Schubert prefaces his theme and seven variations with a substantial introduction, an Andante, during which vague rhythmic outlines of the coming theme could occasionally be heard to emerge from the seemingly improvisational texture. The theme itself is little changed from the actual song; however there is a new tempo indication, namely, an Andantino as opposed to the Ziemlich langsam (fairly slow) of the Lied. Some ornamental notes were added (to be precise, it is actually these ornamented figures that are most strongly foreshadowed in the Introduction), and most of the phrases were played twice to let both the pianist and the flutist try them out before the Variations begin. These Variations are crafted in the usual nineteenth-century manner, culminating in a grand and virtuosic Variation VII, wholly in E major, whose dimensions and scope, like those of most variation-finales, are expanded far beyond those of the actual theme. A truly magnificent rendering!

Moving chronologically forward to Paul Taffanel, himself a brilliant flutist and composer, the next work on the programme was the famous Andante Pastoral et Scherzettino. This truly ravishing piece was characterized by elegance, flexibility, and sensitivity which, in a broad sense could also be attributed as hallmarks of Taffanel’s artistry. Such is the refined texture of the work that the composer/performer’s phenomenal virtuosity is almost an understatement. He was not partial to affectation and while the Andante Pastoral et Scherzettino is undoubtedly tinged with more than a gentle dose of Romantic fervour, the performers ensured that sentimentality has no place. Beneath the supple fluency lay a rigorous and robust adherence to accuracy of pulse and rhythm.

Georges Hüe’s work Fantasie for Flute and Pianoforte came next.  Fantasie, as the name indicates, is characterized by almost improvisational moments which, however, belie a strict and rigorous structural framework. Blumenthal Duo displayed dizzying colours, flexibility in tone, elegance of touch: in short, French style is epitomized in this wonderful piece.

Joseph Vella, VIAF’s Artistic Director, was represented in his work Jeux op. 68, a work composed for flute and harpsichord. Despite the presence of a beautiful harpsichord in the concert hall, the pianist opted to perform it on the the more modern piano. Using a gossamer touch, with semi-arpeggiated chords he managed to reproduce a light texture in the sound that was markedly different from the one he displayed in the previous pieces.

his work is in one movement and is meant as a playful dialogue between the two instruments. In fact, the harpsichord does not just accompany, as it were, but echoes ideas proposed by the flute, comments on the thematic proceedings, and at times asserts itself in quite a forceful manner. Jeux is the first work wherein the composer experiments with his personalized serial techniques that find their fruition in the group of three works entitled Segments Nos 1, 2, and 3.  In this work the composer’s inclination towards contrapuntal treatment comes out quite markedly and the performers more than did justice to it.

Kent Kennan’s Night Soliloquy brought this wonderful evening to a close. The work attests to Kennan’s brilliance in compositional techniques and understanding of the instruments’ colour and texture.

Throughout the entire performance, Luba manifested complete mastery both in technique and musical understanding. Her phrasing was impressive, to say the least, and the evenness of her tone throughout the whole gamut of the flute’s range was maintained throughout. In Daniel Blumenthal, she found a most accomplished accompanist who, one could readily notice, is a soloist in her own right.

A long and enthusiastic applause greeted the performers at the end. Following Gabriele Vianello’s mesmerizing prowess on the pianoforte only two days earlier, this year’s sequence of chamber music concerts promises to be a most exciting and rewarding one!

Roll out the next!

(Photos used for this review courtesy of Mr Sam Cefai.) 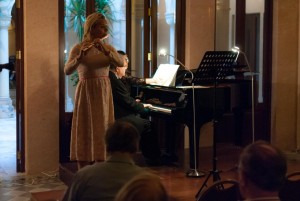 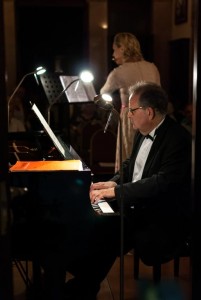 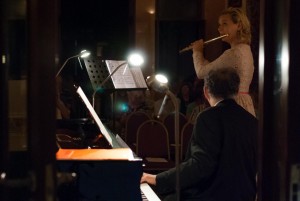 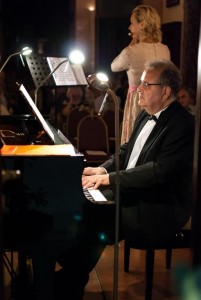