The concerts offered this year in the Victoria International Arts Festival are impressive not only because of their range but also because of their quality.  From every conceivable chamber formation – solo recitals, duos, trios, quartets, quintets, sextets and even bigger ensembles – this is a feast both for the ears and the eyes.  Programming is carefully balanced to include works from every period and in most genres.  There is something for everyone and the large audiences that have attended these concerts attest to the excellent performances on offer.

On Tuesday 19 June there was the first of 3 string quartets – the Minguet Quartet from Germany.  Made of up experts and professors of music at universities and institutions such as the Vienna and the Berlin, this quartet has an extremely busy schedule, with concerts taking them to prestigious venues such as the Berlin Philharmonie, the Elbphilharmonie, Hamburg, the Library of Congress, Washington, the Muziekgebouw, Amsterdam, and many more.  Accepting to perform in tiny Gozo is only credit to the hardworking committee and the enhanced profile of VIAF.

The programme started with Beethoven’s String Quartet in Bb Major op. 18 no. 6.  This work is the last of the group of six quartets in the op. 18 set.  The first movement is marked Allegro con brio, and while it hardly introduced anything innovative, it did present some musical merrymaking.  The joyful main theme contained that already characteristic Beethovenian urgency.  The second theme was typically less driven and tooks on an almost stately character at the outset, but eventually turned effervescent and manic.  The material was repeated, after which the development section ensued.  Here, the music became a little more serious, even tense.  There was a clever little ‘joke’ that occurred in the latter part, when the music unexpectedly stopped dead, suddenly capturing the attention of the listener.  After the development concluded, the main material was heard again and the movement came to a close.

The second movement is an Adagio of great beauty and simplicity.  Yet, as is so often the case with this composer, his simplicity has a sophistication and this quality was one of many that Minguet Quartet drew out in the most subtle and elegant way.  It came across as pure music, clothed in instrumentation that was perfectly appropriate for its innocent character.  The alternate melody was also simple and lovely.  The main theme returned and there followed a brief coda.

The Scherzo ensued. Marked Allegro, it was delivered as a busy, talkative movement, full of joy and humour, and it presented such a contrast to the Adagio that one could feel its playfulness and humour more strongly.  The finale, subtitled “La Malinconia” and marked Adagio at the outset and later Allegretto quasi allegro, presented probably the most complex music in the work.  It began with a dark, slow introduction, quite unlike anything else in the quartet.  The mood was mysterious and intense throughout the first third of the movement.  When the Allegretto section began, Beethoven did not take listeners back to the backward-looking delight of the first movement, but rather to a more modern sound of joy.  The character of the themes was decidedly less rooted in the language of Mozart and Haydn here, more foretelling of Beethoven’s own style to come.

The second piece on the programme was an arrangement of a gorgeous Mahler Lied, namely, Ich bin der Welt abhanden gekommen, adapted for string quartet by Annette Reisinger, who played second violin with Minguet Quartet.  One is always slightly (or less so) sceptical of arrangements, especially when the original works so well!  However, Annette Reisinger made a very good job of this well-known song.  The strings blended seamlessly and the rich and lush texture of Mahler-s late-Romantic harmonies and beautiful melodic lines were exquisitely brought out.  The mournful violin solo between the second and third verses was reminiscent of parts of the Kindertotenlieder composed at about the same time.  In spite of this and other moments of anguish, the song was generally imbued with a mood of quiet acceptance and resignation.  A truly beautiful work wonderfully interpreted!

The final item on the programme was Brahms’ String Quartet in C Minor op. 51 no. 1.   This work is so pervaded by the motives of the first movement, that it can be considered cyclic (a multi-movement work that uses recurring passages or themes throughout).  The close tonal relationships and integrated key structure of the four movements added to the overall coherence.  In the opening Allegro, a bold and rising arpeggio over a throbbing accompaniment set the epic tone for the movement.  It was in the strictest sonata form, with each subsequent theme developing and expanding logically and methodically out of the last.  The Romantic character of the Romanze (Poco Adagio) movement belied its complex and highly organised structure.  Its themes were all derived from the opening motive of the first movement.  The third movement, marked Allegretto molto moderato e comodo – Un poco più animato, developed as a Scherzo and Trio in regular form.  The main theme of the Scherzo, in an unusual duple rather than triple meter, was derived not from the opening of the quartet, but from the middle section of the first theme.  The Trio was in Brahms’ Ländler style, imitating an Austrian peasant dance.  In the energetic Finale (Allegro), Brahms brought together all the motives and structural elements of the quartet.  In addition, he used a section of the first movement’s main theme as a recurring motto to articulate the movement’s large-scale form.

What could be discerned, apart from the beauty of the works chosen for performance, was the way that the four members of Minguet Quartet maintained an excellent balance between their instruments, apart from the easeful manner they moved from one style to the next.  Brahms was not performed like Beethoven, Mahler asked for a different mind-set.  Such is the profound musical intelligence of this ensemble that despite the fact that the audience was listening to three canonical German works, two of which belong to the late-classical/Romantic period, yet the idiosyncratic quality of each work maintained its individuality.  This was not a one size fits all — rather, there was respect and adherence to style and form throughout.  The result was a performance of an extremely high standard, both musically and intellectually. 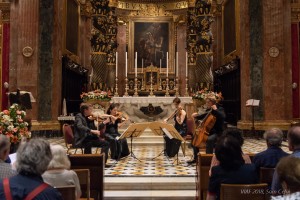 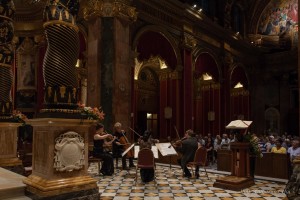 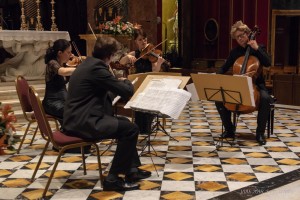 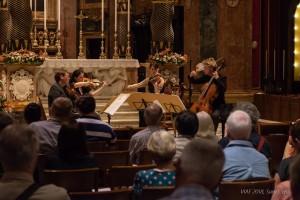 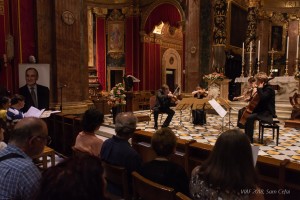 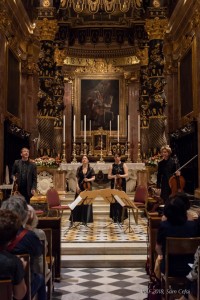