Yesterday evening saw a clarinet and pianoforte recital by Scottish clarinettist Kate McDermott and English pianist James Willshire. This is not the first time that Kate has performed on Gozo but it was a first for James. It was an evening of understated elegance and quiet confidence which characterised the interpretation of the all chosen works.

Starting with Yuste’s Capricio Pintoresco, Kate immediately asserted her presence and her musicality with her firm control, exquisite breathing and rippling articulation of her notes. The work can be classified as Neo-Romantic and is designed to highlight the technical abilities of the performer, with beautiful melodies that suit the clarinet well. It ably combines creativity with technical ability. It is vibrant in colour and exciting in its tonal and dynamic range. Next came Arthur Bliss’s Pastoral, which, as the title implies, imparts a feeling of Arcadian beauty and idyll. Tonally, it is centred on D. Such a key, as always in Bliss’s music, is not rigidly adhered to; soon the long, arching clarinet theme which begins the piece hints at broader tonal regions. A secondary idea on the piano, marked grazioso, begins in a clear C major, although that too is not held for long as the clarinet takes up the new idea (with an important triplet insertion), again stretching the tonality. An extended piano passage leads to a quiet 6/8 aspect of the second subject. The 3/4 returns at the passionate climax before the piano ushers, in the final part, Tempo primo, a gentle restatement of the long initial theme which now reveals its affinity with the second subject. Gradually the music winds to a pianissimo close, the bare fifth D – A leaving the mode unresolved. The work was performed with great finesse and careful attention to tone quality, which was well-rounded, mellow and wide.

Weiner’s Hungarian Dance is a piece typified by quiet melancholia so typical of this type of work. The clarinet proved most suited to the mood that such a work necessitates and Kate managed to bring out the dark and mournful tones that made her interpretation a very valid one. Schumann’s Three Romances came next. The first, in B flat minor, is a breathless piece in ternary (ABA) form whose triplet rhythms never waver until the final two bars. Atop this glistening arpeggiation is a lyric melody in two strains that gives way to gentle syncopations. A passionate codetta marked by singing sforzandi and alternating piano and forte dynamics brings the work to a stern conclusion. Of the three romances, the second, in F sharp major, has gained the most currency among pianists as an independent concert work. It is a relatively brief piece, whose thick texture led Schumann to the then-uncommon step of notating it on three staves. The 6/8 meter lends the melody the flavour of a barcarolle. The romance comes to an end as lyricism vanishes into pianissimo syncopations. The third romance, in B major is structured on the Rondo principle, with the central digressions, themselves separated by a return of the refrain theme, titled Intermezzo I and Intermezzo II. The principal idea, sharply rhythmic, freely imitative and not at all what a later composer might think of as a ‘romance’ theme, is attractive and the mellow tones of the finish offer the listener ample reward. These three short pieces were given an exciting performance, with each mood captured admirably by the performers.

Vella’s Three Songs for Phaedra op.56 take their inspiration from a story taken from Greek mythology. The three pieces are entitled Phaedra in Love, Phaedra Rejected, and Phaedra in Death. In the first, Lento cantabile, the music tries to capture the wistfulness of love through the cantabile yearnings of the phrase structure – undulating not only graphically but also in emotional intensity. The initial busyness of the second song, Andante con moto, sets a contrasting mood to the first one with the repeated E’s towards the end seemingly highlighting the veiled anger and bitterness of rejection. After this, the music expands into relatively longer, calmer notes as if to end in a mood of fateful resignation. For the last song, Molto moderato, the composer opts for the sound of the more sombre Clarinet in A. Everything is now slower, simpler and, phrase wise, much more square-cut than the previous two pieces. The atmosphere is clearly that of a funereal march. Demanding technically as well as musically, Kate interpreted the work with aplomb, producing a very fine tone on the instrument while paying scrupulous attention to dynamic intensity.

The last work on the programme was Horovitz’s Sonatina, a very exciting work that makes use of displaced rhythmic patterns, irregular phrasing and a gentle dose of jazz. It is light-hearted and follows a traditional pattern of the three-movement division. The first, in classical sonata form, concentrates on the middle register of the clarinet, mainly lyrical against a rippling piano background. The second movement is an A-B-A song structure employing some of the lowest notes of the wind instrument in a long cantilena over a slow chordal accompaniment. The finale is a kind of Rondo which alternates two themes in equal proportions, exploiting the upper register of the clarinet. The harmonic idiom of the whole work is obviously tonal, and, like most recent compositions of Horovitz, the Sonatina is melodically and rhythmically much influenced by jazz and other popular music. It calls for equal virtuosity from both players.

A merited lengthy applause greeted the performers at the end of an evening of very fine music-making indeed! 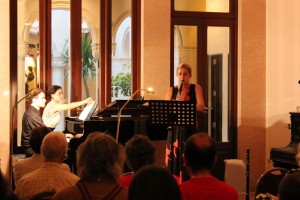 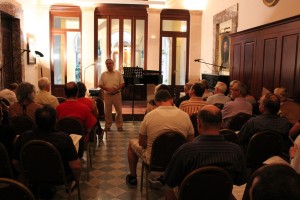 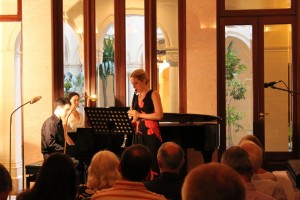 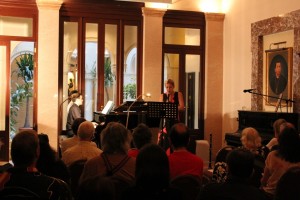 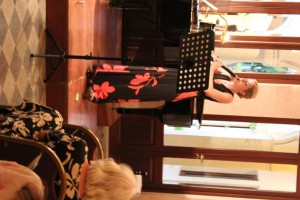