Four years ago, Prof. Mro Joseph Vella (VIAF Artistic Director) was asked to sit on an adjudicating panel of a very important international competition in Vicenza.  The winner of that competition was the very young pianist Giovanni Bertolazzi, a student at the prestigious Conservatorio ‘Benedetto Marcello’, Venice.  Mro Vella invited Giovanni to take part in the yearly debutants’ concert held during the Victoria International Arts Festival every year.  It was pretty obvious even then that this young pianist had tremendous promise.  Earlier this year, Mro Vella got in touch with Giovanni again and this time he asked him to give a full recital in this year’s 21st edition of the Festival.  Giovanni came and gave a powerful recital of canonical works on Thursday 21 June.

Starting with the formidable Sonata no. 21 in C Major op. 53, better known as the Waldstein, the tremendous power and understated confidence of Bertolazzi was in evidence from the very first phrases.  This work is not for the faint-hearted as it makes enormous technical and musical demands on the performer.  Many a time one listens to this work and the performer is more partial to attending to the technical difficulties with the consequence of overlooking the musical ones.  A fine balance needs to be maintained throughout for the work to be successful in performance.

In the hands of Bertolazzi, the first movement, marked Allegro con brio, began with a rhythmic, driving, obsessive theme that created an enormous sonic space and a veritable energy field between the hammering chords in the left hand and the right hand’s completion of the phrase, several octaves higher.  Reiterated, starting from a slightly lower register, the theme seemed less energetic, but the effect was deceptive.  While the energy level remained high, additional ideas were subtly being developed, and the second subject was introduced as each of these ideas strove to dominate the composition’s discourse. Contrastingly, this second subject, in E major, introduced a moment of tranquillity, but calm quickly dissipated, moving toward a brilliant, triumphant finish with the underlying rhythmic intensity of the main theme.  The development section began with a darker cast to the main theme, which then veered off into a new direction.  The previous materials became interlaced and developed, and this process generated considerable tension.  In the reprise that followed, Beethoven ingeniously avoids a mere restatement by expanding on the phrase at the end of the main theme’s first reappearance.  There were many other deft touches here, including the brilliant coda based on the main theme.

The second movement, bearing the marking Introduzione (Adagio molto), is short, serious, and introspective, drawing its immense dramatic power from the many figurative transformations of the initial three-note utterance spanning the interval of a sixth. Significantly, the mysterious, contemplative mood of the opening was enriched by the expressive lyricism of the melody appearing in the middle part.  This counterpoint of pure lyricism and contemplation constituted the essence of the movement.  Originally, Beethoven wrote what is now know n as the Andante favori as the second movement, but decided not to include a movement he considered too long. Without pause, the music emerged from the philosophical atmosphere of the Adagio and blossomed into the brilliant main theme of the finale, marked Rondo (Allegretto moderato).  This melody, appearing as seven notes then repeating all but the last, had a unique, pastoral quality in its quieter moments at the beginning.  However, Bertolazzi transformed this tranquil mood into one of ecstatic celebration, spelled out by colourful sprays of notes that established a harmonic base.  As the theme developed and new ideas were dished out, the dramatic intensity of the movement, reinforced by a repetitive octave-figuration in the left hand, yielded to moments of deceptive fatigue.  However, the main theme returned, imposing a triumphant and joyous sense of order, and a scintillating coda completed the composition.  With its mighty rhythmic drive, harmonic inventiveness, thematic incandescence, and wealth of ideas, this interpretation of this magnificent Sonata consolidated its place among the great works of the piano repertoire.

Chopin’s Scherzo in B Minor op. 20 no. 1 came next.  This is the Polish composer’s first venture into the Scherzo world which he immortalised.  It follows the strict ternary form of its models.  In his later examples we find him approaching the form more flexibly.  After an eight-measure introduction of two sustained chords, an arabesque-like figure made its first appearance, crystal clear and beautifully articulated by Bertolazzi.  This idea, distributed between the hands, became both melody and an accompaniment for sighing chords in the left hand.  The first part of the Scherzo moved agitatedly to the dominant before the repeat, closing with a leap up to sustained notes that would later become part of the transition to the Trio and the introduction to the coda.  The second, contrasting idea of the Scherzo employed the same figuration as the main theme, but on new keys and with a different overall melodic shape.  It was both quasi-developmental and insistently repetitive, with unusual harmonic shifts.

The central Molto più lento section, the Trio, was a masterpiece of beautifully-crafted polyphony, with two ideas in the right hand alone.  The brightness of the Trio‘s new key, B major, faded only a moment before the reprise of the first Scherzo theme.  Hesitant descending figures and the leaping idea from the first theme dissolved into a transition leading to the impetuous coda.  Throughout the coda, accents on the first beat of the measure in the right hand vied for supremacy with accents on the second beat in the left hand.  After a wash of chromatic scales, a few strident chords closed the work in B minor. Despite the fact that moments of pure lyricism were perhaps sacrificed for speed, yet, the dynamic range requested by Chopin in the closing measures of the Scherzo pushed the music into the Lisztean range of power.

Scriabin’s Sonata no. 5 op. 53 was a new work to most patrons in the audience.  We are more likely to listen to the Russian master’s superb Preludes.  Composed in one movement but having distinct sections, a deep rumbling from the very bowels of the instrument called to life this restless, 12-minute excursion into the most colourful of passionate realms.  Delicate, evaporative harmonies built largely of fourths (rather than the more traditional thirds) ensued, wandering about apparently aimlessly but actually working their way to a heated but not violent outburst that did, for a time, seem to be pointing towards an F sharp tonal area.  However, B major is just as important to the work as its myriad episodes unfolded, and the strongest cadential area (implied or otherwise) was the sustained pressure on E flat during the final portion of the piece.  Just as the listener felt a final, well-earned resolution coming, however, Scriabin thrust his virtuoso fieldwork up into the stratosphere, where it vanishes without a trace.  Bertolazzi gave a memorable rendition of this work, one that asked for intellectual maturity in equal measure with virtuosic display.

Franz Liszt is always a good idea to finish off a programme with and works such as his Rhapsodies and the famous but rarely performed Dante Sonata come in handy here, if the performer can tackle them.  Bertolazzi chose Hungarian Rhapsody no. 12 to close off a most exciting recital.  The compelling spontaneity of Gypsy improvisation, which Liszt took infinite pains to notate, obscured the fact that Gypsies are magpies, appropriating what they hear to transform and meld it with their own strains – and a great deal of what Liszt’s Gypsies heard was popular music.  Thus, Hungarian Rhapsody No. 12, also well known as No. 2 of the six rhapsodies Liszt orchestrated, opened starkly with two themes from a czárdás by Mark Rószavölgyi worked to a dark grandeur to give way in sparkling hijinks to turns on a theme by Béni Egressy, spiced with numerous melodic oddments that may be Liszt’s own, to make one of this genius’ most popular, colourful, and exhilarating works.  Bertolazzi excelled beyond expectations; indeed he did so throughout his recital, demonstrating a marvellous technique coupled by a maturity that belies his 20 years of age.  Certainly an auspicious future beckons for him! 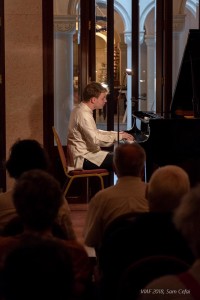 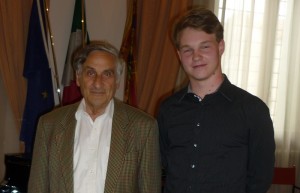 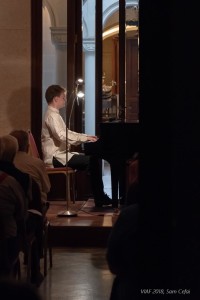 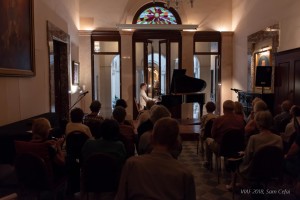