Michela Galea, 16 years of age, gave a full-blown pianoforte recital on Friday 6 July. One could safely say that in Michela there is the wonderful promise of an intelligent and sensitive performer.

Choosing a demanding recital, covering Beethoven, Chopin, Rachmaninov, Ginastera and Liszt, Michela sailed through her chosen pieces with a confidence that belies her very young age. Technically sound, she is also gaining experience that would serve her in good stead when it comes to the interpretation of deep emotional works from the Romantic period.

Starting with the first movement from Beethoven’s Sonata in C Major op.2 no.3, Michela set the right tone for the evening, one of confidence not untinged with caution, a sense of fun and a definite technical quality without which it would have been well-nigh impossible to see herself through the recital. The first movement an Allegro con brio, is dominated by a witty opening theme initiated by a figuration in double-thirds. Additional motifs generated from the initial theme complete the first theme group, and while the general mood remains light-hearted, the music is also dramatic and replete with characteristic Beethovenian drive and assertiveness, this energy exemplified by brilliantly ascending arpeggiated chords. The second main theme, based on material from the aforementioned Piano Quartet, is lyrical, combining an air of graceful nonchalance and elegant spontaneity. What follows is a remarkable passage that begins with the opening theme and goes on to feature three ascending arpeggiated chords, the last of which, an augmented triad that sounds at first like a bold misstep, is both mischievous and unexpected, not to mention absolutely daring for its time. In the development section, Beethoven deftly moves through several modulations and then briefly suspends all development, indeed, all thematic activity. Suggesting the despair of a traveller who is lost, this static moment ends when the main theme reappears in a more assertive form. The movement ends with a coda, which Beethoven enlarges to monumental proportions, in violation of any traditional conception of a coda. This movement was highly accomplished, with careful attention to detail and an intellectual understanding of the work prevailing.

With an opening thematic group comprised of fragments, Chopin’s first Scherzo sets the pattern for all the ensuing four. Two crashing, dissonant chords start the work, the first a shriek in the upper register, the second a grim reply wrenched from the guts of the piano, plunging the listener immediately into an atmosphere of turbulence and terror. The chords have a function that is structural and thematic and not merely introductory; they will recur later in the work. The next theme enters, boiling furiously, with a melody emerging from the figuration like bubbles that rise and burst on its surface. Chopin would use the same kind of writing to entirely different effect in a number of other works, including the sunny Scherzo that is the second movement of the Sonata in B Minor op 58, of 1844. Later composers, notably Debussy and Ravel, would learn much from this method. This is hardly a conventional tune but rather a series of notes, skimming along like fragments atop the swarming activity of both hands below, which often seems ready to spin out of control.

Like everything in this headlong tragedy, the contrasting second group arrives quickly in the shape of brooding, grandly expressive chords that do not, however, long-slow the impetuous flow of the opening sequence. Another incarnation of the seething opening carries on its surface another sighing melodic fragment, less a melody than an acoustic idea, one may say. This, too, is overwhelmed by the furious tide of figuration that leads ultimately back to the main theme. The sweeping chord sequence prepares the way for the middle section, in a gentle B Major and at a much slower speed, a moment of peace in this otherwise comfort-less sea. Nothing could be more welcome to the listener’s frayed ears and nerves. This is followed by a delicate melody apparently drawn from a Polish Christmas carol floats above a gently-rocking accompaniment. The tune grows eloquent as it widens in range, but the overall effect of the central panel is hypnotic and soothing. A minute shift in harmony signals unrest, however, as the chords that opened the piece harshly break in, plunging the listener back into the turmoil of the first thematic group. The expressive chords that form the second theme prepare the way for the coda – a brilliant sequence of rushing figures interrupted by a massive, dissonant chord, hammered ten times with the utmost ferocity – before a furious, boiling passage and a rushing scale seem to fling the music to its shattering conclusion. Michela tackled this very difficult work with audacity and, although one feels that a little more experience would help her immensely in fathoming the emotional depths of Chopin, she gave a very creditable performance indeed.

Another Chopin work, his very famous Polonaise op.53 no.6, proved a hard nut to crack. Michela coped with the technical difficulties very well – perhaps more depth and breadth in tonal range would have brought out the monumentality of the piece even better.

Rachmaninov’s passionate Etude in G Minor op.23 no.5 is a well-liked piece. Fiery in its extreme emotional outbursts, utterly endearing at the opposite end, this work is a winner. It was followed by Ginastera’s Danza del gaucho matrero. It is a technically very demanding work, with rippling notes and cascading chords, making use of Argentine folk tunes on the way. This work was among the best performed during the evening.

Four of Liszt’s monumental works were next, namely, his Valse de Bravoure, Waldesrauschen, Gnomenreigen, and the well-known Hungarian Rhapsody no.6. Any Liszt work is not for the faint-hearted and Michela certainly rose to the occasion. Tackling the very difficult finger-work with relative ease, coping with the emotional demands of the Rhapsody, getting the right tempos at every turn – this was a wonderful performance that brought to the fore not only the pianist’s talents but also her potential for even further development. 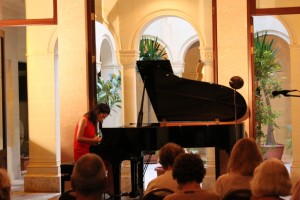 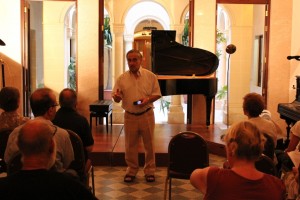 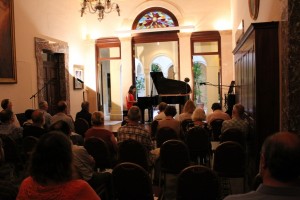 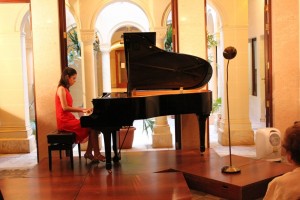