Claire Massa is an established mezzo soprano whose versatility is both remarkable and impressive. She is also a very intelligent singer.  She gave a wonderful recital consisting of German Lieder, French chansons and English Art Songs on Sunday 26 June.  Throughout, pianist Joanne Camilleri provided a most steady and sound accompaniment.  Fresh from her massive undertaking of Bach-s Goldberg Variations, Joanne showed her mettle in an entirely different setting, moving with impeccable ease from one style to the next and never faltering even for a second.

The recital started with a demanding Brahms work, namely, the Acht Zigeunerlieder op. 103.  Consisting largely of short pieces, the work unravels in its totality when sung as a whole.  In fact, it is difficult to imagine any of the songs performed in isolation and this, from both a structural and thematic point of view, places a weighty responsibility on the singer’s shoulders.  From the outset, Massa’s voice, which is clear, deep, and silky, travelled easily and from the back of the hall one could follow every single nuance of dynamics and tone, from the soft phrases to the all but hushed whispers of a ppp.  She manifested a maturity that has seen her voice developing not only physically but musically, with ringing top notes that are remarkable for a mezzo.

Next came 5 songs by Eric Satie, a totally different style to that of Brahms, and one that both Claire and Joanne captured intelligently.  First came Trois melodies (1916), the first of which was The Bronze Statue.  This opened with a rollicking, dance-hall introduction which settled down to an ‘oompah-ing’ ostinato rhythm as the voice entered.  Like many of Satie’s melodies, this one seemed deliberately to avoid any sense of linear structure.  It is as charmingly aimless as the text, which describes the boredom of a bronze frog, into whose mouth passers-by toss coins during a game of tonneau.  The text of Daphénéo was written by the seventeen-year old daughter of Satie’s friends, the Godebskis, and depends for its intelligibility on an untranslatable pun: eliding a final ‘n’ turns un oisetier (a non-existent word meaning ‘bird-tree’) into un noisetier, or ‘hazel-nut tree’.  The music, again, came across as almost aggressively unmelodic, with a lulling, laid-back quality in its rocking repetitiveness.  Le Chapelier is noted genre-Gounod, as it were, and is in fact based on a folk melody Gounod used in his opera Mireille.  Here one could hear the quality of vocal virtuosic excess run absolutely amok, the melody covering a span of almost two octaves in its first four bars, the accompaniment cheerily bounding around in compound meter, a highly Gounodian touch.  A tour de force indeed!

The first of two more Satie songs was Les anges (from Trois melodies 1886).  Each of these Trois Mélodies features slow and dreamy extended vocal lines over a fairly simple chordal piano accompaniment.  In Les Anges the line ‘calme, sous la voûte infinite’ (‘calm, under the infinite vault’) may be the key to the way Satie has approached the text.  His music really does suggest that ‘es anges planent dans l’éther’ (‘the angels drift in the ether’).  It was performed in a most charming and evocative style.  Contrasted to this was Je te veux (I Want You), which is a setting of a text by Henry Pacory.  The song may be connected, according to Satie scholars, to Paulette Darty, a Parisian burlesque chanteuse. It is a valse chantée, a waltz song, well-suited to Darty’s reputation as ‘Queen of the Slow Waltz’.  The song had a simple refrain/verse/refrain structure, although later re-orchestrated instrumental versions included a new section (a trio) added on to the piece. The raucousness and raunchiness of this piece made it interesting and entertaining to Parisian music-hall audiences, and was in stark contrast to Les anges.

Italy is known for many beautiful things, not least its songs.  Amongst other impressionistic works, Ottorino Respighi wrote a few atmospheric songs, three of which were performed by Claire and Joanne.  These were Nebbie, Nevicata, and Pioggia – three miniatures that capture both a graphic picture but more essentially a mood.  There was quietude in the first, drama in the second, and atmosphere aplenty in the third, all elegantly executed and beautifully enunciated.  Next came Benjamin Britten in the form of his A Charm of Lullabies op. 41.  These are cradle songs with a Jamesian twist – one could not help acquainting the innocence of a couple of these songs with the Blakeian songs of innocence, while on the other hand there were a couple of others that had a bizarre, ironic, and almost Gothic edge to them reminiscent of Henry James’s The Turn of the Screw.

The last item on the programme were two songs by Leonard Bernstein, namely,  Extinguish my eyes, and When my soul touches yours.  Both technically and musically one felt that these posited a very difficult hurdle for the performers, and one could not but appreciate the expertise with which this was negotiated and overcome.  Displaced rhythms, lack of a melodic line in the second song, syncopations, vocal leaps – these two songs are a true test for any self-respecting singer.  One felt that Claire scored a high distinction here!

Throughout, both performers exuded confidence, assurance, and musicality by the ton! The audience appreciated this, as the very warm applause at the end attested!  We hope to have them back with us sooner rather than later!! 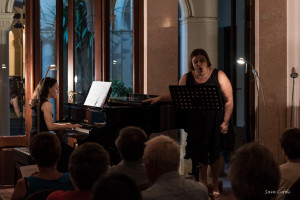 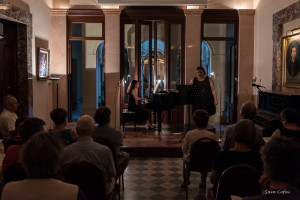 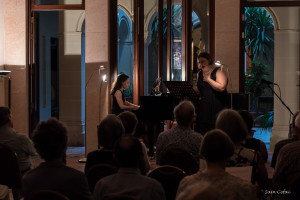