The evening concert on Tuesday was saved at the eleventh hour. Due to unfortunate circumstances, Geoffrey and Penelope Haydock could not travel to Malta. They were due to perform together with Alexander Volpov as a pianoforte Trio. Maltese pianist Elizabeth Leonardi stepped in at the very last minute, and with just a few hours before the concert, she and Alexander put together a most exciting programme that thrilled audiences to bits.

Alexander manifested his robust technique in his interpretation of Bach’s Suite no. 1 in G Major BWV1007. Performing the entire programme from memory, this magnificent Back work was characterized by brilliant technical prowess, clear articulation and musical sensitivity. He sustained the audience’s attention throughout with his remarkable understanding of a work that has challenged many a great cellist. The next piece saw Alexander team up with Elizabeth, herself a Moscow-trained brilliant pianist in her own right. Performing two movements from Boccherini’s Sonata no. 6, Elizabeth kept a low profile throughout. In fact, the writing for the pianoforte in this work is more akin to a continuo support role. Throughout the performance, there was a mutual understanding between both performers and there was no indication that they had just come together a couple of hours before the start of the concert!

In Saint-Saëns Allegro Appassionato, the weight of the melodic responsibility is more equally shared between the cellist and the pianist. Except for one awkward, fleeting moment (which was more than acceptable in the difficult circumstances), this piece was typified by verve, passion and romantic ardour. Two works by Davidoff followed, namely, Song without words, and By the fountain. Romantic to the core, these two works allowed the performers to sing their parts with melancholic tones in the former and gay abandon in the latter.

Surely very few pieces can compete with Rachmaninov’s Vocalise. In whichever way one listens to it, one cannot but be struck by the haunting beauty, plaintive sighs and intense resonance this wonderful piece is endowed with. All these striking qualities were forthcoming, on both cello – who had the melodic interest almost throughout the piece – and the pianoforte which, in mainly contrapuntal textures, wove its sinewy way into the cello’s fabric. A most impressive performance!

The last item on the programme was another Boccherini piece, this time a Rondo. Full of excitement, movement and virtuosity, it brought this unique concert to a brilliant finish. A short encore was given, to the delight of a much-enthused audience! Thank you Alexander and Elizabeth for making it happen! 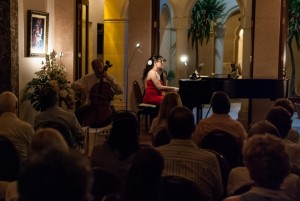 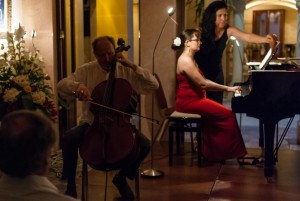 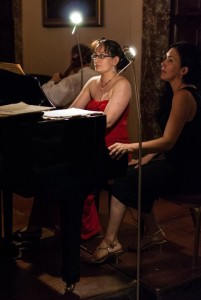