Sunday evening saw the participation of Gisèle Grima and Erika Gialanzè in a highly interesting and entertaining concert of music for four hands. Many composers since the Classical period have been interested in the genre and while two hands on a piano can be rousing, one can only imagine what four hands can do!

Performing to a very sizeable and appreciate audience in Aula Mgr G. Farrugia at the back of St George’s Basilica, duo Grima/Gialanzè started the programme with Schubert’s Fantasie in F Minor D.940. One could not help but be immediately struck with the sheer beauty of the initial melody, one that only Schubert could come up with – so simple, yet profound. Utterly beautiful!  For this work and also for the second one, Gisèle played the treble while Erika took control over the bass. Spanning the entire spectrum of the pianoforte, with its most extreme ranges ensured an all-encompassing sonority. Schubert’s Romance is in four continuous sections that are discrete only in mood and unified by the opening theme’s melancholy tone of endless tragedy. It opens in the tonic with the sad, simple, and soulful tune Allegro molto moderato. This is followed by a stormy Largo in F# minor, a movement of tremendous pathos and power, followed by an Allegro vivace – Scherzo also in F# minor. The tonic returns for the final section, a massive double fugue with a new subject set against the opening tune as a second subject. After an enormous polyphonic climax and a brief pause, the sad, simple, and soulful tune returns one last time, battered and beaten, but still singing its elegiac song. Throughout, the pianists performed with attention to detail of phrasing and dynamics, and balance was equitably maintained throughout.

Alex Vella Gregory is fast making a name for himself as a composer. His Irkejjen was given its world premiere during the evening and it was immeasurably helpful for the audience to have the composer present and willing to speak about the work himself. In his most articulate and confident style, Alex explained how he is constantly being inspired by Valletta, the timeless, chaotic, beautiful and at times run-down capital city of Malta, one steeped in history and tradition and which has seen its fair share of tragedy especially during the Second World War. Again, Irkejjen falls into four distinct movements which are self-contained and compact, each one expressing a mood rather than telling a story, although the programmatic element was not entirely absent from the work. From Nix Mangiare and Piazza Regina with its sophisticated Cordina Coffee House, to the more chaotic hub by Il-Biccerija location by the port, onto the all but red-light district of the Dijuballi area where a few decades ago family fights right in the middle of the street were par for the course – the work came across as a kaleidoscope of wild colour and infinite variety. Expressing a penchant for displaced rhythms, sudden pauses and thundering chords, Vella Gregory is, consciously or less so, establishing a firm idiosyncratic idiom that shows potential and promise.

The final work on the programme was Brahms’ monumental op. 39, a sequence of 16 Waltzes inspired by the form that became Vienna’s stamp in the middle of the nineteenth century.  The limitations of the waltz form compelled Brahms’ creativity to find other means of expression, particularly in harmonic manipulation, making each of the sixteen Waltzes a gem. However, nearly all of them possess a few common characteristics, such as a rounded binary form in which the first half moves to a new key and the recapitulating second half begins with a quasi-developmental segment before returning to the main theme and the home key. Many display the harmonic invention and subtlety that mark Brahms’ extraordinarily rich texture in later pianoforte works as well as the large-scale structures of the 1860s.  Miniature gems in their own right (who can forget the ravishing beauty of the penultimate Ab Waltz?) these were performed with assurance and panache. A gentler tone could perhaps have been mastered in a few of the pieces but overall, this work was accomplished with excellence and technical mastery.

A full-rounded applause greeted the performers at the end. It was truly a wonderful evening, thanks to Gisèle and Erika! 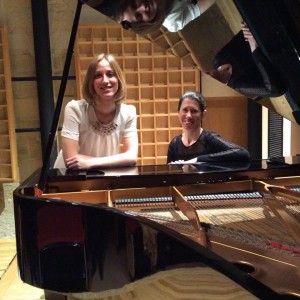