Yesterday evening’s concert featured Upper Austria’s Lentini Quartet, comprised of Johannes Wilhelm, Verena Stockl (violins), Simon Mattern (viola) and Anna Maria Aigner (violoncello). It is with great pleasure that the Victoria International Arts Festival welcomes very young musicians from Upper Austria every day. The organisers are very proud to acknowledge that one of the prizes awarded to winners of the Prima la Musica Competition for Youths, Upper Austria, is participation in the Victoria International Arts Festival. In fact, this is the eighth time that Upper Austria has sent very promising, up-and-coming musicians to perform in the Festival.

The evening’s concert started with one of Haydn’s delectable quartets, op.50 no.2, better known as one of the ‘Prussian’ Quartets. Immediately, the quartet, led by Johannes Wilhelm, betrayed a maturity well beyond their age (comprehensively their ages together amount to less than 58 years!!) Apart from precise intonation, the quartet’s phrasing, dynamic range and understanding of the Classical style was impressive, to put it mildly. The worked as one, thinking one idea, producing one result.

The first movement of Quartet in C Major op.50 no.2, Vivace, is with pregnant and clear-cut themes, full of resourcefulness and originality, bristling with a profound excitement and a struggle for expression and for orientation. The utterances are bold and passionate, for Haydn is at the crossroads and is experiencing the same Romantic upheaval that agitates Goethe before he is able to master his own self to reach his resolute, transfigured classicism. One senses that in previous first movements of his Quartets a major element is missing in his style, the absence of which prevents the final integration of his idiom and form. The composers of the pre-classical era have not been able to rid themselves entirely of the drawbacks, as it were, of the style galant. Haydn recognises that what is needed is a more judicious part writing that in turn impels him to a reinstatement of polyphony in musical construction. This is exactly what Haydn implements in his first movement of this Quartet, an implementation that represents the final and decisive step towards the achievement of the classical ideal of instrumental style. The Adagio is a supreme example of a sublime Haydn slow movement, elegant, refined and understated in its expression. The third movement, a Menuetto, followed closely by an Allegro, is quintessentially imbued with a warm and human solicitude that not even Mozart is capable of. A simple Menuetto is transformed into an animated and vivacious flight of musical imagination, coming across in boundless yet controlled energy, wholesomeness, clarity of thought and purity of feeling, inexhaustible humour and impeccable craftsmanship. In his development of thematic element in the last movement, a brilliant Vivace assai, Haydn gives the essential by eliminating everything that is secondary or that has no bearing on the destiny, as it were, of his formal treatment of the different musical ideas. The detail serves him in working out the character of his motives, in leading them into a situation that enables them to present the solutions of their fates as inevitable natural phenomena. As a whole, the quartet carries the symphonic principle, the art of developing a pregnant idea through all imaginable metamorphoses, to such a high degree that, according to Brahms, it was thereafter “no longer a joke to write quartets”. The themes are whittled down to their most elemental and plastic simplicity, permitting an unlimited thematic use. Ultimately, with unbroken flow and complete naturalness, Haydn’s popular tone is unspoiled by all his mastery of the technique of composition. Lentini Quartet produced the right tone and the precise range of dynamics to make of this performance a very creditable one.

Next came Schubert’s Quartet in Eb Major op.125 no.1. This time, the Quartet was led by Verena Stockl, who changed places with Johannes. The ensemble found no difficulty at all in changing both the mood and the style – from the understated Classical one to an emotionally intense mind-set. Schubert’s music asks for singing and this is what the Quartet managed to do with their respective instruments. Worthy of particular mention was the viola which, with its dark tones of almost tragic foreboding, served as a solid bridge between the brighter tones of the violins and the lower baritone of the cello. The performance was taut, compact and balanced in terms of tone and dynamics.

The two three-measure phrases that introduce the main thought of the Quartet‘s first movement, an Allegro più moderato, show both a flexibility of timing and a kind of humour not readily apparent in Schubert’s other early works. After repeating the initial 12-bar thematic idea, Schubert moves on to offer a substantial transition passage of such breadth and reluctance to leave E flat major behind that it almost seems a kind of subsidiary theme. T he second main theme, marked dolce, makes clever use of syncopated accents while never grazing outside the sweet, graceful pasture Schubert has prescribed for it, even when the lower three instruments propel themselves forward with a rapid dotted-note accompaniment. The development is both concise and wholly traditional, and the recapitulation differs noticeably from the exposition only when changes are required to facilitate presenting the second theme in the tonic rather than the dominant.

Schubert puts the Scherzo, marked prestissimo, usually the third movement in a four-movement plan, second. An Adagio in 6/8 meter follows, spinning forth calmly using the thread of one serene first violin melody and then another; sonata form is in operation, but one hardly notices. The finale is a rambunctious Allegro in the best hybrid (Haydn-Schubert) style imaginable. The bouncing three-eighth note gesture heard at the opening of the first movement pops back up during the second theme. The accompaniment moves between electrifying sixteenth notes and slightly more aristocratic triplets, occasionally taking a breather to allow some chorale-like phrases to creep in.

This was an exuberant yet balanced performance which further attested to the ensemble’s rigour, discipline and control.

Finally came a contemporary piece by H. Schmidinger, which was introduced by the violist, Simon Mattern. Entitled ‘Zupf di!’, Simon explained that one of the meanings for this utterance is ‘Get lost!’ Well, get lost they certainly did not for, despite the rhythmic displacement and diversity, pizzicato, ‘col legno’ – you name it, it was there! – the ensemble gave a very creditable and exciting performance of a piece that could have posed much greater difficulty had they not been well-equipped technically. As it turned out, there was a strong sense of enjoyment! We certainly hope that Lentini Quartet does not only not get lost but we hope that they find their way back to Gozo next year! 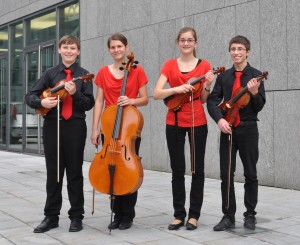