Piano recitals can generate a lot of excitement. When the performer is a Professor of Pianoforte Studies at the Mozarteum expectations run high. Biliana Tzinlikova did not in the least disappoint: rather, she totally overwhelmed an awe-filled audience.

Starting her recital with Mozart’s Variations in F Major ‘Salve tu, Domine’ KV 398 (416e), Biliana manifested a total command of both the instrument and the work. Hers is a robust touch – one imagines her tackling the greatest Romantic concertos with orchestra – but she kept it beautifully under control for the Mozart work. She has a creamy legato that simply flows and flows, rendering the tone succulent and feverishly rich in the more Romantic works. In the Mozart it came across like a velvety gloss over polished ivory.

Mozart wrote many sets of keyboard variations based on themes from operas popular during his time, such as the Variations (K352 on the chorus ‘Dieu d’amour’ from Grétry’s Les mariages samnites, and the Variations K180 on ‘Mio Caro Adone’ from Salieri’s La fiera di Venezia. The source of the theme upon which Mozart based the set of variations tackled by Ms Tzinlikova was the ‘Salve tu, Domine’ from the 1779 opera I filosofi immaginarii by Giovanni Paisiello. The theme came across as most elegant in its sprightly, delicate character, but it is a theme that is actually heard just once, Mozart understandably anxious to present his more attractive offshoots. While the first variation was charming in its busier manner, the second effervesced in its greater sense of exuberance. The ensuing variant was regal in its confident, almost serene character, while the slow fourth was reflective and light. Radiant trills abounded in the next variation, which also featured a cadenza, but not as grand a one as presented in the dramatic sixth. The piece closed with a reprise of the theme.

Next came Joseph Vella’s 6 Preludes op. 70. This piece is a set of six miniatures, each displaying a different mood. They are contrasting pieces meant to be played as a group rather than separately. In this manner, the contrasts and over-all planned structures come out more well-defined.  Untypically, the composer gives his tempo indications in English. The first Prelude, marked Playfully, announced a sextuplet figure, under which the left hand played melodic fragments. However, the opening figure permeated the whole piece. With a sway is the indication for the second Prelude – basically a Moderato piece in triple metre, with subtle hints at waltz idioms as found in classical jazz. The third Prelude, With decision, alternated mostly between 12/8 and 15/8 rhythm. The forceful triplet movement made way for a few lyrical bars towards the middle of the piece, after which the momentum was picked up again. This was followed by the fourth Prelude, Dreamily, which is yet another of the composer’s ‘night’ pieces. The melody floated along above an ostinato left hand, and the dynamics hardly ever rose above a mezzo piano level. Using a 5/8 time-signature throughout, Prelude no. 5, Sprightly, bounced and danced along towards a subdued end in unison octaves. Prelude no. 6, With Simplicity, brought this set of pieces to fitting close.

Presenting a stark stylistic and technical contrast to the Mozart piece, Vella’s work was performed with confidence, panache and assurance. Biliana managed to coax out myriad tone colours and once again one could appreciate both her intelligence and her versatility.

The third piece was by Hoffmeister, a composer who occupied an important place in Viennese musical and cultural life. He was much respected as a publisher: his firm published works by Mozart and Haydn, and he was friendly with Beethoven, but he was also extremely well-known as a composer. He wrote at least eight operas, a substantial number of symphonies, and a large amount of music for the flute, a popular instrument amongst the wealthy amateurs of the time. He also wrote expressively and rewardingly for the piano, which had a similarly wide audience. Biliana has researched this composer (and also Heller, whose work was the last item on the evening’s programme), and she has also recorded his works.  In fact, she has recorded 3 CDs of Hoffmeister’s Sonatas for Pianoforte with label World Premiere recordings for Naxos International.  Biliana explained to the audience that untypical for a Sonata, the one she chose to play, namely, No. 3 in A Major does not follow the expected paradigm of a fast-slow-fast movement. Rather, it consists of just two movements and starts with a rather slow and sedate section followed by a more sprightly one.  This work is in the style of Mozart’s Viennese Sonatinas, although more elaborate and demanding technically, but it had all the charm, controlled wit, and elegance one associates with those works.

The last work on the programme was the monumental set of Variations on a theme by Beethoven op. 133 by Heller. In fact, this work extends an almost 40-minute piece and is built on the wonderful second movement of Beethoven’s Appassionata Sonata.  A set of 21 variations built on the deceptively simple theme which is a kind of a chorale piece, this was one veritable tour de force that kept going from strength to strength. Virtually an obscure composer, Stephen Heller was a German-Hungarian of Jewish descent. The son of a maths teacher, he started composing at the tender age of six and lived in Vienna at the age of 13, where he performed and met Beethoven and Schubert. Similar to Liszt, he was to make Schubert’s songs famous with his own transcriptions, particularly in France. Yet first he went back to Hungary, where – according to his own description – he had to “lead a nomad’s life without peace or hope or goals”, pushed by his over-ambitious father from one European concert hall to the next, encountering Paganini, Chopin, and Louis Spohr. After suffering a massive health set-back, he finally escaped from his father’s grip and made his living as a pedagogue and writing about music.  His witty articles found their way into Robert Schumann’s Neue Zeitschrift für Musik, and his music raised Schumann’s interest in him as a composer.

These set of variations undoubtedly put him on the musical map, and the work ranks alongside other sets of variations such as those by Liszt, Rachmaninov, and others.  A simply colossal composition that attests not only to the ingenuity of Heller but also to the greatness of Beethoven – what is at face value an ‘unremarkable’ theme has the apocalyptic potential and symphonic possibilities of much more complex themes.  Biliana swept through the work with consummate ease, dazzling technique, and power.  Variations are notoriously difficult to play, and are meant to test the mettle of the performer, both technically and musically, and in Biliana Heller’s work found an assured and accomplished player.

A prolonged round of applause greeted the end of this massive work, after which Biliana treated the audience with a charming piece by Khachaturian. 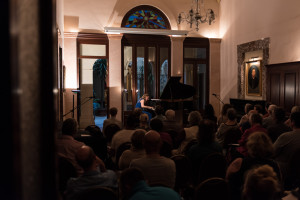 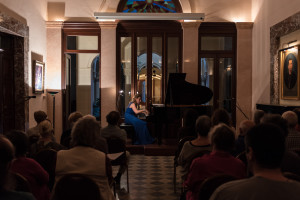 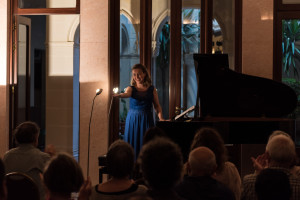 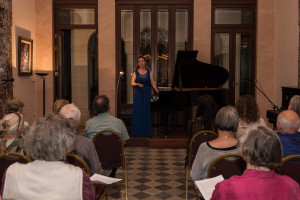