Starting with Beethoven’s String Quartet in Eb Major op.74, known as the Harp Quartet, the Martinů immediately asserted their superb mastery and control over the genre. The nickname ‘Harp’ refers to the characteristic pizzicato sections in the Allegro of the first movement, where pairs of members of the quartet alternate notes in an arpeggio, reminiscent of the plucking of a harp. Like many nicknames for Beethoven’s works, this was created by the publisher. The first movement is one of the best examples of Beethoven’s management of musical tension. The short Adagio introduction is not tight in thematic integration with the rest of the movement; it serves a similar function to the Introduzione of the first movement of op.59 no.3. The main motifs of the Allegro are the lyrical melody appearing several bars from the beginning, and the pizzicato arpeggios played by two instruments accompanied by repeating quavers played by the other two. At first, these two themes appear thematically and rhythmically unrelated. It is only in the last fifty bars that the listener discovers that Beethoven’s true purpose is for them to be played simultaneously, beneath a frenetic violin part, to generate the climax of the movement.

The Harp Quartet parallels many facets of the Fifth Symphony. The heroic quality pervading Beethoven’s Middle Period is heard extensively in the first movement. Both the Fifth Symphony and Harp Quartet have intense Scherzos: in the case of the Quartet this appears in the third movement with a tempo marking Presto. Nevertheless, the grand entrance to the opening of the Finale of the Fifth is noticeably absent in the opening of op.74. The third movement, marked Adagio ma non troppo, is a typical Beethoven slow movement, understated yet profound, full of feeling but never sentimentalised. The fourth movement follows a highly traditional theme and variations form. The Classical style here juxtaposed against the heroic nature of the first movement frustrates Beethoven scholars who seek to contextualize this piece in Beethoven’s stylistic trajectory. This was indeed a first-rate performance, very intellectual but with the right dose of emotional power that is the hallmark of a Beethoven work.

Next came the rarely-performed Grieg only string quartet, op.27. Grieg’s instrumental music is as fresh as his songs. Norway’s most famous composer dedicated his career to the pursuit of a national sound. The respect he had for his predecessors illustrates the sincerity with which he worked towards this goal. He wrote in the Romantic tradition with, in his own words, the determination to “create a national form of music, which could give the Norwegian people an identity.” Like Sibelius, Grieg tried the string quartet several times, but left only one mature, completed essay in the form. He began writing the Quartet in G minor in the summer of 1877, and worked on it through the winter in a composing retreat in Lofthus, in the Hardanger district of Norway. “I have recently finished a string quartet which I still haven’t heard,” the composer wrote to a friend in the summer of 1878. “It is in G minor and not planned to be meat for small minds! It aims at breadth, vigour, flight of imagination, and, above all, fullness of tone for the instruments for which it is written.”

An astonishingly rich sonority is indeed an obvious characteristic of this piece, and one excitingly brought out by the Martinů. All four parts have an extraordinary amount of double-stopping, creating a full-bodied sound that is orchestral but also often folkloric, like the Hardanger fiddle music that Grieg knew and loved so well. The main theme of the work, however, comes from Grieg’s own song Spillemaend (Minstrels, or Fiddlers). The poem that Grieg set in 1876 as the first of six Ibsen songs (Op.25) is about the Hulder, a water spirit who offers minstrels great musical gifts in exchange for their happiness, and the choice of this song here suggests an allusive and elusive personal programme. The theme from the song is boldly stated at the outset and recurs often throughout the first movement. Motives from it appear in the middle movements, and the motto theme returns again in the leaping finale.

In many ways, Grieg’s bold rethinking of the venerable medium clearly inspired Claude Debussy in his own String Quartet, composed 10 years later and also in G minor. The mellow, round and robust texture that the Martinů managed to produce was the stuff of legend. Harmony, rhythm, and sheer sound are all more important than the intimate polyphonic interplay that characterized the classical string quartet. The Romanze movement, with its increasingly abrupt mood swings between sunny lyricism and darkly agitated passion, takes its point of departure from late Beethoven, while the scherzo-like Intermezzo is the most folkloric in its rough dancing energy and spirited play with metre. This leads into the last movement, marked Lento – Presto al Saltarello. The saltarello enjoyed great popularity in the courts of mediaeval Europe. During the 15th century, the word saltarello became the name of a particular dance step (a double with a hop on the final or initial upbeat), and the name of a metre of music (a fast triple), both of which appear in many choreographed dances. The saltarello gave birth to the quadernaria in Germany and Scandinavia where Grieg presumably heard the style.

For the last piece of this long but infinitely exciting programme, the Martinů chose Dvořák’s String Quintet No. 3 in Eb Major op.97 B.180, for which they were joined by French violist Pierre-Henri Xuereb. This is a formidable work that could easily bring out any weakness that an ensemble may have. This was certainly not the case, rather, this composition further highlighted the undisputed strengths that the Martinů are so famous for. It is also a work that gives great importance to the inner voices of the quartet, namely, the second violin and the viola, whose rich sonority and beauty of sound contributed to the overall effect of the performance. The Quintet was written between 26 June and 1 August 1893 and first performed at New York’s Carnegie Hall on 24 January of the following year.

The Quintet opens with a solo melody for the extra player, the second viola, but it is another subject which forms the main material for the development section, a melody based on an Indian song Dvořák heard at Spillville. A strangely sad episode featuring the two violas is heard before the shortened recapitulation. A succeeding Scherzo is excellent and uses a theme in the trio section reminiscent of one heard in the slow movement of the New World Symphony. It is also of similar character to the viola theme which forms the basis for the variations in the Sextet. The third movement, a Larghetto theme and five variations, leaves the exotic atmosphere of Indian music for that of simple devotion. The subject of the variations is half in the major and half in the minor keys, ingeniously composed. The music returns in the end to the unadorned theme. Whilst the presence of Beethoven may be felt in the variation movement, the Finale’s main theme is noticeably similar to one of Schubert’s in the Finale of the latter’s Trio in Eb D929 and, indeed, to a theme of Smetana’s in his Trio in G Minor. Although interesting to observe, such reference to the works of others does nothing to detract from Dvořák’s achievements in this marvellous Quintet. His own individual qualities are fully able to withstand any criticism that might be engendered in this connection by those unable to appreciate the full genius of this genial man.

String Quintet no.3 in Eb Major is extremely inspired and profound, perfectly built and immensely amiable for the listener – simply beautiful. It reflects the powerful new sources of inspiration Dvořák discovers in America, yet also echoes homesickness, missing the family and familiar landscape. The work reveals the quintessence of the mature Dvořák: a generous fund of folk-inspired melody, a marvellously second movement, crystal clear construction in all four movements, and a fascinatingly colourful exploration of string textures, with the added viola thrown in for good measure.

A rousing applause greeted the end of the performance and despite the length of the programme (just under two hours) the audience lingered on and seemed reluctant to leave. The Martinů expressed their pleasure at performing in the Victoria International Arts Festival and are hoping they will be invited again next year. Of course they will!! 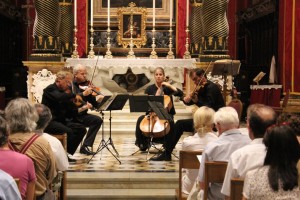 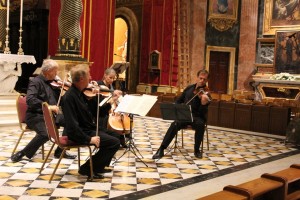 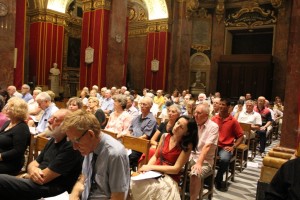 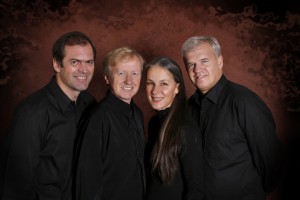