Lieder is not an easy genre to sing.  Requiring sensitivity, balance and an acute intellectual approach, it is all too easy to fall into the trap and interpret it in an operatic fashion. This is even more precarious when the singer is Italian! However, tenor Alessandro Maffucci, accompanied most ably by pianist Roberto Russo, proved that Italian singers are not only good at what they do best, namely, opera, but are also excellent interpreters of the very difficult genre of Lieder.

Starting with two of Liszt’s two best-loved songs, Im Rhein and Lorelei, Alessandro, who performed entirely from memory, gave a most accomplished performance of these two very difficult works. Particularly in Lorelei, with its very high and low tessitura, spanning the whole tonal gamut of the tenor’s range, Alessandro showed his completely vocal mastery and his very mellow timbre betrayed no rough edges throughout.

The main work of the evening was, undoubtedly, Schumann’s great masterpiece, his song cycle Dichterliebe. This is a very difficult work, comprised of 16 songs on a text by the German poet Heinrich Heine. Expressing sorrow, exuberance, hope, despair – you name it, the whole emotional range is there – Alessandro was at his very vocal best, expressing himself in the minutest of nuances, impeccable phrasing, and a velvety pianissimo that is so rare. His power was also in evidence, with ringing top Bbs coming out in all their robustness and force.

Worthy of mention, too, was pianist Robert Russo, one of the most refined pianists we have had throughout the Festival. Very sensitive and never overpowering the vocal line, he also came into his own in this more pianistic episodes of this Schumann work. He also played a solo piece, namely, Liszt’s Widmung, a reworking for solo piano of another of his songs.

In all, this was a most accomplished performance, one characterised by elegance and refined sensibility. 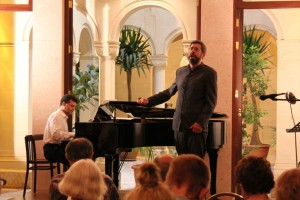 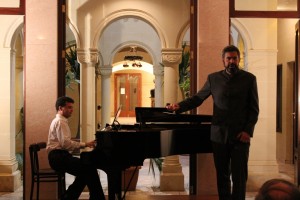 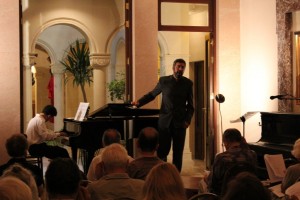