On Friday 22 June, VIAF was privileged to host an ensemble made up of professors from the famous Mozarteum in Salzburg and the University of Vienna, among other prestigious institutions.  This consisted of Klara Flieder (Violin), Thomas Selditz (Viola), Christophe Pantillon (Violoncello), and last but not least, Biliana Tzinlikova (Pianoforte).  The concert they gave will not be forgotten easily by those who were lucky to attend to it.  In his brief introduction, Fr George Frendo (Artistic Director of VIAF) stressed the point that VIAF has become a point of reference with regard to quality, artistic standards, and extraordinary achievement on the tiny island of Gozo – ensembles such as the evening’s Quartet from Austria was only one part of the proof of all this.

First on the programme came Mozart’s Piano Quartet no. 1 in G Minor K478.  There is something about Mozart that sounds deceptively easy; just try playing his works and you’re in deep trouble from the very first bar.  The style is inimitable, getting it right is devilishly difficult.  It’s all to do with temperament; one that is intellectually rigorous but tempered with a gentle dose of flirtation that is so typical of the late Rococo and early Classical periods that influenced this great genius.

Cast in Mozart’s most dramatic key, the work (like its companion, the Piano Quartet in E flat, K493) certainly goes far beyond the conventional domestic character of similar chamber works, its dark, romantic sonorities enhanced by a true chamber music equality of part-writing that emphasizes the lower strings.  This was gloriously captured by the Quartet, who got it right, as it were, from the very first notes.  The writing for piano skilfully juxtaposes passages of concerto-like virtuosity with others in which the instrument fades and blends into the texture of the strings. There was some impressive playing by Biliana in this regard; she blended seamlessly with the beautiful texture of the strings, supporting, emerging as soloist, understated yet present throughout.

The work consists of three movements, the first a powerful Allegro that contrasts stormy drama with more lyrical introspection.  This unsettled mood carries through into the central Andante, while even the final movement, a Rondo, fails to bring the light-hearted relief generally expected from such movements.  Balance was maintained throughout, classical poise and elegance the hallmarks of the interpretation of this work.

Next came Martinů’s 3 Madrigals for Violin and Viola H313, a work that does not easily find its way on the concert programme for it is as intellectual as it is technically difficult.  Klara  Flieder on the violin, together with Thoms Selditz on the viola showed what true interpretative prowess means: total command of the technical difficulties beautifully balanced by flair and creative input.  As the title suggests, Martinů recalls his strong interest in Baroque and earlier music, and he accordingly writes a piece where the musical lines are polyphonic, mostly independent.  He also enriches the texture with creative usage of double stopping on both instruments at once (thus creating full four-part harmony). Other devices he uses to attain more harmonic richness include chordal accompaniment figures, including rapidly passing all four strings on an instrument with the bow.

As interpreted by Klara and Thomas, the 3 Madrigals represent a major statement concerning the unexpectedly wide capabilities of this modest ensemble.  The movements, Poco Allegro, Poco Andante, and Allegro, range in mood from a driving opening movement, a mysterious and very colourful second, and a busily Baroque finale.

The third and final item on the programme was Fauré’s Piano Quartet no. 1 in C minor op. 15, a chamber work of exquisite beauty and finesse.  There are a number of remarkable things about Fauré’s First Piano Quartet which mark it as a prominent turning point in the composer’s professional life.  One notes first the complete assurance in his shapely handling of sonata form, fastidious craft in a coruscating dialogue of parts, the richness and indelible personality of its deftly worked melodic material, and unfailingly adept writing for piano.  Worth noting, too, is the combination of a highly refined personal style with compelling high spirits.  Above all, his First Piano Quartet strikes persuasively not merely the urbane (the epithet which clings to Fauré), but the urban tone which George Bernard Shaw made explicit when he noted that “From Mozart I learned the art of saying important things conversationally.”

Romanticism and its doleful heroics are left behind in this work, as are the frivolous, the formulaic, and the balletic. The Quartet from Austria was fully cognizant of this and their reading of the score attested not only to their undoubted talent from a technical point of view, but to their refined intelligence in capturing the mood and tone of the work.  The sonority of the cello, beautifully played by Christophe Pantillon, was especially evocative.  The first movement, an Allegro molto moderato, held the listener through its fluent melding of energy and lyricism.  The Scherzo surprised us with blithe, pizzicato pricked, perpetuum mobile fantasy, while the great Adagio demonstrated that profound passion is not incompatible with balance and classical purity of line.   Finally, the soaring Allegro molto capped all with a gracefully poised major/minor shimmer of gaiety.

This was an evening of great music-making, one worthy of all the great venues anywhere. 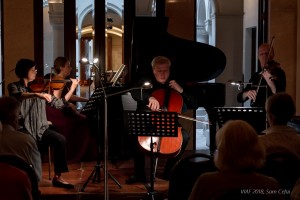 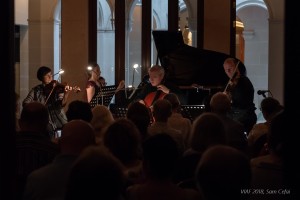 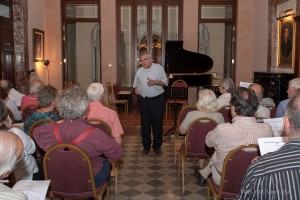 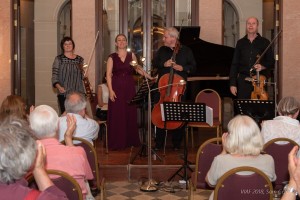 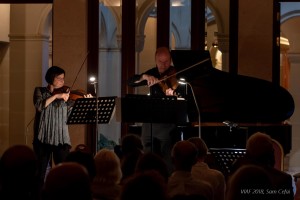 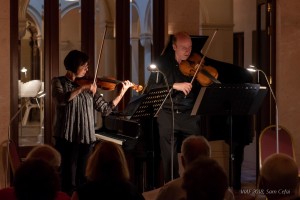