The first of two vocal recitals scheduled for this year’s VIAF took place on Monday 18 June, with soprano Francesca Aquilina and pianist Julia Miller.  The programme consisted largely of Lieder, a genre that is eminently suitable for the type of chamber concerts VIAF promotes.

Francesca Aquilina is a young soprano possessing a crystal-clear voice that can scale perilous heights with ease.  What is most impressive is her ability to maintain an even tone throughout the vocal register and it was admirable to note that she was able to change styles in a masterful way.

The programme started with three chansons by Gabriel Fauré, namely, Chanson d’amour, Claire de lune, and the famous Après un rêve.  Francesca has a commanding stage presence and she delivered these wonderful gems with confidence and assurance.  Her voice has lately acquired a more rounded texture which is eminently suitable for French chansons.  Together with the Debussy songs that followed, Beau soir, Mandoline, and Nuit d’etoiles she captured the suavity and elegance that is integral to French writing at the end of the nineteenth century.  Phrasing was smooth, intonation perfect, and the balance between the voice and the piano was impeccably maintained.

Pianist Julia Miller is a soloist in her own right, and she continued the Debussy thread (this year also being the first centenary of his death) by performing Deux Arabesques.   Debussy’s love of parallel chords, in this case, triads in first inversion, was apparent in the arpeggiation which opened the first Arabesque, and even more so when the same figuration recurred at much greater length towards the end of the piece.  The music unfolded in an ABA form whose tonal scheme hinged on dominant harmonies with the addition of ninths and the occasional thirteenth.  The first and third sections, typically more atmospheric than thematic, were characterised by the sort of rolling left-hand accompaniment that was beautifully phrased by Miller, a type of pattern that figures so prominently in the composer’s later piano music.  The A major middle section, foreshadowed by the work’s opening triad, was both shorter and more thematically organised than its neighbours, although its primary melody was actually the inversion of a subsidiary motive from the A section.

The second Arabesque, marked Allegretto scherzando, came across as altogether more energetic and sprightly than the first.  Less harmonically innovative than its companion piece, it relied on tried-and-tested harmonic formulae to define its G major tonality.  Like the first Arabesque, the piece is shaped into an overall ABA form, again with a shorter middle section in the subdominant.  Significantly, the triplet-sixteenth-plus-eighth rhythmic cell which dominated most of the second Arabesque was completely absent in the middle section, which instead featured an ascending sequence of broken parallel thirds.  Unlike the its companion piece, the B-section material returned near the end, again making reference to C major, only to be rejected in favour of the primary rhythmic cell. A rather startling forte digression to B major seven bars before the end was quickly deflected back to the home key, and the music disintegrated into a series of increasingly quiet, quintessentially Debussyean punctuation.  A very beautiful interlude in between the songs, indeed!

Grieg’s Solveigs Lied never fails to haunt.  There is an arcane, almost mystical quality to it that no matter how hard the performer (or the listener) tries to unravel the mystery it resists deconstruction and remains firmly shrouded in Norwegian mist.  Contrastingly, Tosti’s two songs, Aprile and Serenata which followed Grieg’s aria, albeit mildly melancholic, possess the kind of lush romanticism one associates with the Italian temperament.

The Schubert of Italian songs par excellence, Tosti left a rich legacy of opus which is on a par with the Lied composers of the nineteenth- and early twentieth-century Germany.  He specialised in light, rather sentimental music, often using elements of folk songs such as traditional song patterns or the occasional use of dialect. They are rarely technically demanding, but require strong stylistic skills.  While his best known songs are to Italian texts, he also wrote songs in English and French.

Like so many songs, Aprile dwells on the beauty of nature and its capacity for exciting love.  Spring, especially, is associated with love, and this song, with its gentle, sentimental sensuality, is no exception.  “Don’t you feel in the air, the perfume which spring spreads? Don’t you feel in your soul, the sound of a new, sweet voice? It’s April! It’s the season of love! Oh, come with my, my sweet, into the flowering meadows. It’s April! Your feet will wander through violets, you’ll have roses and cornflowers on your breast, and the white butterflies will flutter about your dark hair.” The repetitions of “It’s April!” each starting very quietly, and then repeating more exuberantly, mesh charmingly with the flowing melody, and when the singer and accompaniment managed to convey the delicacy of the song without being precious, and the sensuality without becoming over-done, this was one of Tosti’s most appealing interpretations.  Added to this, Francesca’s voice itself possesses the type of freshness one would associate with temperament of Tosti’s song, and she delivered a beautiful interpretation of this lovely piece.

The song Serenata uses a sweeping accompaniment, and a quick, light tempo to establish the mood of a singer under his beloved’s window.  The accompaniment by Julia Miller sometimes imitated the strumming or plucking of a guitar or mandolin, further setting the atmosphere.  Also, while the lover sings of how the beloved refuses to give a home to his kisses, the reproach is definitely a playful one.  In fact, Francesca ‘acted’ this piece to perfection, with an ever so subtle coquettish attitude so integral to the song.

The only operatic aria inserted into the programme was Verdi’s ‘Sul fil d’un soffio esteso’ (from Falstaff).  Sung by Nannetta, this continued in the same vein from the previous Tosti song.  A flirting girl tries to attract the attention of Falstaff — once again, Francesca delivered a most creditable performance of this aria.

The last five items on the programme consisted of wonderful songs that are traditionally English, Scottish, and Irish.  These are wonderful miniatures of serious beauty, haunting melodic lines, simple phrasing, and generally uncomplicated accompaniment.  These ranged from Moore’s Willow Song with its exquisitely crafted melodic line and vertiginous tessitura with a perfectly-pitched high D by Francesca, to the traditional Irish song It was the last rose of summer which, for me, is one of the most ravishing melodies in the canon.  Vaughan Williams’ Silent Moon is characterised by a serene and sunny mood, the composer presenting a lovely, soaring melody of rich Romantic character, achieving a passion and intensity of expression, without storming the heights or employing loud sonorities.  A Robert Burns song, namely, My love is like a red red rose came next, a song that has a gorgeous yet simple melody while the last song was another traditional Scottish one, O waly waly – and simple, haunting tune.  A delighted audience asked for an encore and this came in the form of Puccini’s O mio babbino caro.  Taken at perhaps a slightly rushed tempo, this gorgeous aria brought a very delightful recital to an end. 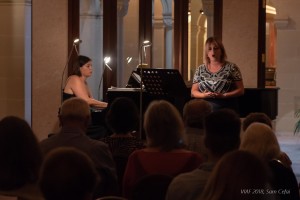 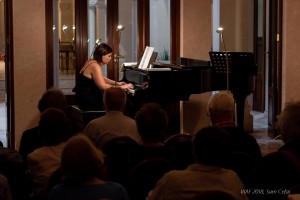 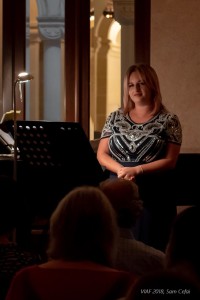 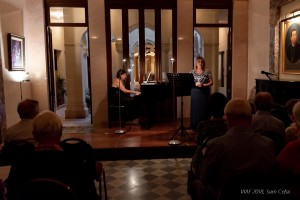