Geoffrey and Penelope Haydock are two of the staunchest supporters and generous benefactors of the Victoria International Arts Festival.  Their superb contacts made it possible for the organisers of this Festival to purchase a Yamaha concert grand piano in 2000, an acquisition that catapulted the standards aimed for to unprecedented heights, and also enabled the Artistic Director and his team to tailor the programming accordingly.  Apart from being supporters and benefactors, the Haydocks are also exceptional musicians and teachers, and in this regard they have also contributed substantially towards the Festival through their concerts and master classes.

Their concert this year was particularly important and it resonated emotionally with the patrons who packed the Aula Mgr G. Farrugia.  The programme presented works for a clarinet quartet, with a few of the works also including the piano, beautifully played by Penelope Smith (Haydock).  The clarinettists were Geoffrey Haydock, his brother Alan, John Norman Cushing, and Gozitan Mario Galea.  The first piece they performed was Greenway’s Fantasie for Piano, 3 Clarinets and Bass Clarinet, a work originally composed for this type of ensemble.  Immediately, the audience was struck by the superb blending of the clarinets and the authoritative yet completely unobtrusive piano playing by Penelope.  This work clearly reflected the influence of Schubert, Mozart, Beethoven and Debussy, verging between the late Romantic and early Impressionistic style.  After this piece, Geoffrey addressed the audience in his most impeccable way, delightful, entertaining, and informative in equal measure.

Next came R.A. Smith’s My Love is like a Red Red Rose, which, of course, is a setting of the famous Burns’ poem.  The liquid beauty of the melody was beautifully carved out in phrases that networked among the high and lower registers of the clarinets.  This work was followed by Mozart’s Piano Quartet no. 2 in Eb Major, which during the concert was performed by a quartet of clarinets and pianoforte rather than by the strings it was originally set for.  This was more than a risk but in the hands of these stupendous musicians it simply worked, especially when one remembers how dear to Mozart the clarinet was.  Listening to this work was unadulterated pleasure, whether it was the rather busy opening Allegro and final Allegretto or the slightly more sober Larghetto.  One could not but admire the singing quality of the instruments and the absolutely magnificent playing on the pianoforte.

The last item on the programme was what by the end of the concert more than a symbolical farewell.  This was Maxwell Davies’ Farewell to Stromness, a programmatic work that graphically depicts the protest staged by the people of Stromness in Scotland, one of the Orkney islands.  This protest was against the proposed uranium mine whose core would have been only two miles from Stromness village.  This work is beautifully wrought, weaving a tapestry of high-strung emotional states underpinned by a steely determination to succeed in its mission.  It portrays by its slow walking bass part the procession of the inhabitants of Stromness leaving their homes in the event of contamination.

Before the performance of this work, Penelope addressed the audience in her inimitable, charming way.  She let it be known that this was hers and Geoffrey’s final concert in public, a sort of farewell to a Festival they came to adopt as their own, one to whom they contributed so generously and in such an understated manner, and one they came to love and care for.  Performing this work thus became doubly significant, and the resounding applause that greeted the final chord attested to the profound appreciation of the audience for these wonderful musicians. 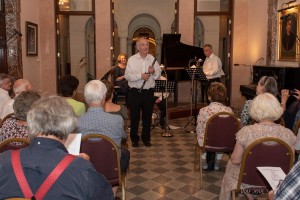 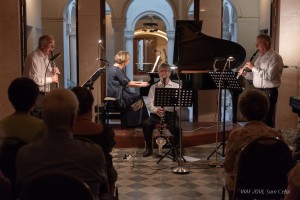