The six-member CivicAntiqua Ensemble from Rome gave an outstanding performance of some well-known and other unedited works of Italian and German Baroque.  Following on the high-powered concert given the previous day, the performance by the Roman Ensemble further consolidated the high standards that this mini-Baroque Series in VIAF has reached.

Harpsichordist Elisabetta Ferri immediately confirmed her musicianship and intelligence by performing the opening piece on the programme, namely, Storace’s Chaconne in C.  Given the nature of its virtuosic and dramatic character it is often used as a show-stopper rather than as the concert initiator, as it were.  However, Ferri made short shrift of the work, one characterised by plenty of difficult finger-work, contrapuntal passages, and intricate rhythms.

Handel’s ‘O Qualis de Coelo Sonus’ HWV239 came next.  This lovely and demanding Cantata for soprano and strings is replete with full, uncompromising virtuosity.  Alternating recitative with fully-fledged arias with some formidable work also on the continuo, this work is a perfect of Baroque passion, drive, and technical difficulty.  The writing in the arias is florid and very demanding on both a technical and an interpretative level.  Typical of German/English Baroque, while there is plenty of melisma and embellishments, yet phrases are perfectly structured and the passion is always contained.  This Cantata is one that spans the entire gamut of the vocal, dynamic, and tonal spectrum.  Annalisa Pellegrini possesses an extremely warm voice that is versatile and malleable.  She tackled this difficult work with musical intelligence and despite the obvious technical difficulty, the singer overcame the hurdles and delivered an impeccable rendering.  Throughout, the ensemble provided the required support — supporting the recitatives and complementing the vocal acrobatics in the arias.  The opening Sonata was simply lovely.

Corelli’s Sonata op. 3 no. 4 is a four-movement work for string ensemble and continuo. There is in this work an ideal of the sensuous expressiveness generally associated with the human voice, but which Corelli applies easefully also to his instrumental writing; the performers enabled Corelli’s melodies to soar boldly and, at once filled with noble pathos and with a serious and sublime lyricism that kept a just balance between instrumental sonority and polyphonic construction.  The same plastic and finely balanced quality permeated the structure of the work.

Two beautiful arias followed, one by Scarlatti and the other by Caldara.  They are scored for a male alto, and in the voice of Roberto Colavalle both composers couldn’t have been more privileged.  Roberto Colavalle is a singer with the world’s most famous choir, the Cappella Pontificia ‘Sistina’.  He possesses one unique timbre, ravishing and mellow, natural and beautifully modulated.  The first aria, namely, Alessandro Scarlatti’s ‘O cessate di piangarmi’ is plaintive and melancholic.  Here, the listener was faced with the work of a romanticist with a penchant for melancholy in the softly elegiac melodies which captivated and enthralled.  Colavalle wove arguably one of the most beautiful arias ever written.  Characteristic of his interpretation were his long phrases which gave the impression that the singer is actually even singing over the rests, prompting the comparison with Milton’s words “notes of many a winding bout of linked sweetness long drawn out”.

Caldara’s ‘Come raggio di sol’ was equally captivating.  The instrumental chords that opened the piece were highly telling and insistent, and the voice even stayed on the same note when it entered for several notes.  The phrasing remained highly subdued, in keeping with the concept of largely hidden emotions, and so the musicians had only the inflections with which to communicate.  There were no stunning leaps or vocal acrobatics, or evenattention-grabbing discords; only the restrained, subdued lines and the simply beautiful and disarming voice of Roberto Colavalle.

Adriano Ancarini proved to be not only an excellent continuo player, but a soloist in his own right.  This was confirmed in his rendition of Boni’s 3-movement Sonata in G Minor.  The opening Largo was delivered in a sedate and composed manner, with an extended melody that swept across a range of tonal and dynamic textures.  The second movement entitled Allegro – alla francese was a light-textured piece in a tripping 6/8 metre which saw a most pleasing balance between the solo cello and the continuo, together with the seamless manner the instruments complemented each other’s sound.  The final Allegro was a busy piece full of cross rhythmic effects and wonderful contrapuntal networking, bringing this delightful work to a close.

Antonio Caldara’s two unedited from his oratorio Il martirio di San Terenziano were given their premiere during the evening’s concert.  Soprano Annalisa Pellegrini sang ‘Chi supplicar’ while contraltista Roberto Colavalle performed ‘Sono un atomo lo so’.  The melodic inventiveness of Caldara was in evidence in both arias, which were superbly performed by the two singers.  It is a wonder that such a splendid work has remained unknown to the world for over three centuries!

The final item on the programme was the very well-known ‘Laudamus Te‘ for soprano and alto duet from Vivaldi’s ‘Gloria’.  Scored in the boisterious and lively key of G major, this very short piece unfolded rapidly and with aplomb.  Throughout, the ensemble admirably led by Elisa Atteo and Valentina Nicolai played with articulation, clarity, and feeling.  Also, the voices blended easefully and it was a most fitting close to yet another fantastic concert! 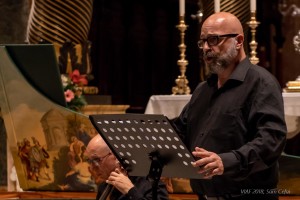 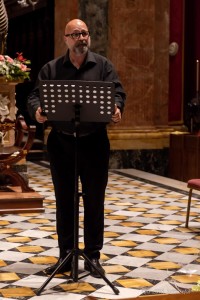 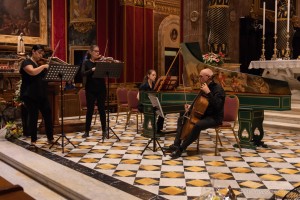 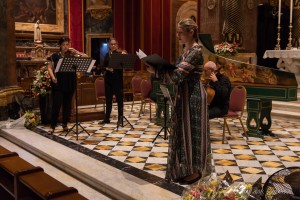 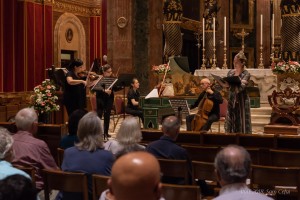 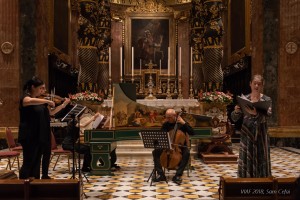 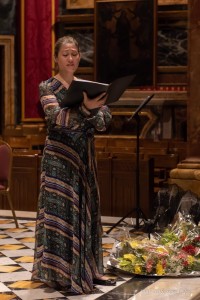 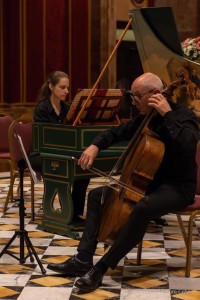 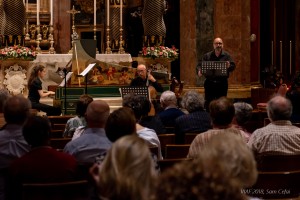