Pierre Henri Xuereb (Viola), Vincent Beer-Demander (Mandolin) as Duo Aldante, together with Gregory Daltin (accordion) set the ball rolling on a long sequence of chamber music concerts that are the mainstay of the Victoria International Arts Festival. Chamber music is a genre unto itself, requiring both the confidence one associates with a soloist, together with the understated but firm camaraderie that is an absolute necessity for ensemble co-ordination. In such a formation, you are only as strong as your weakest link, and yesterday’s performance rose from strength to strength.

The programme was almost entirely dedicated to French chamber music, all twentieth-century examples of the finest and most elegant of pieces. Starting with Jean-René Françaix’s Three Pieces for Mandolin, Viola, and Accordion, the mood was immediately set for what turned out to be an exquisite rendering of what could be called ‘mood pieces’, with delicate exchanges between the viola and the mandolin against a more steady harmonic accompaniment on the accordion.

Two Poulenc works followed, the first one for Trio and the second for Viola and Accordion. The first piece is full of wit and charm, with the gentle dose of irony that one invariably associates with almost any Poulenc work. In the Duo, Pierre Henri Xuereb manifested his mastery on the viola, with sweeping phrasing and wonderful tone control.

Mandolinist Vincent Beer-Demander is a virtuoso player, extravagantly talented and a supreme connoisseur of the literature written for his instrument. Contemporary French composer Francis Lai, who is world-famous for his sound tracks, most notably for the unforgettable film Love Story (1970), was so taken by Beer-Demander’s technique and accomplishment that he composed the Romance de mon Enfance specifically for him. Acknowledging the influence of his childhood years in his native Nice, in an interview Lai says that coming from a family of accordionists he first imbibed the musical sound of that instrument as a child and it stayed with him ever since. He imbued his Romance with the flavour of the Mediterranean, most notably the influence that Nice absorbed from the geographical proximity it enjoys with Naples, and this is what is captured in this beautifully haunting work. Treating both instruments equally, with melodic exchanges between the two admirably balanced, Lai weaves a wonderful tapestry of tone, colour, and mood.  The structure basically follows that of the first movement of a traditional concerto in miniature, with an introduction, a main theme, a virtuosic cadenza on the mandolin, with further development of the theme and a brilliant finish.  What was most striking about this piece is that while one was listening to two instruments generally associated with popular ‘folk’ music, such is the polished technique of both Vincent and Gregory that they elevated the nature of these instruments to the concert platform.

Ravel’s work for Trio followed next, a piece that had all the subtlety, nuance, and delicacy one associates with an Impressionistic work, while Fauré’s Melodie unravelled in the most ravishing of ways. The gorgeous Tarantella for Viola and Mandolin ranked among the most exciting pieces of the evening, with complex rhythms, frenetic speed, and kaleidoscopic colour contributing to the emotional robustness of the work. Milhaud’s first movement from Scaramouche was interpreted once again by the Viola and the Accordion, and this lovely work was given an exuberant, witty, and most picaresque interpretation.

Cosma’s ‘Giocoso’ from Mediterranean Concerto was given an exotic interpretation by Vincent Beer-Demander and Gregory Daltin. In this piece, the accordion was on equally footing with the mandolin rather than sustaining an accompanying role, and the musical understanding between the two performers was nothing short of excellent. The Trio came together for the final piece of the evening, namely, Bolling’s Tango for Trio. This had all the hallmarks of the type of work one invariably associates with Piazzolla – vibrant, exotic, passionate, and powerful. It brought a wonderful concert to a triumphant end.

A resounding round of applause greeted the musicians, who regaled the packed hall with a wonderful encore! 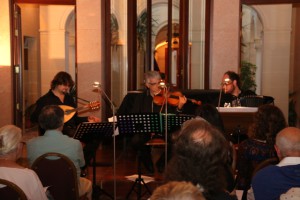 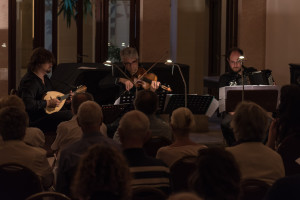 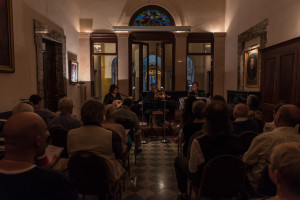 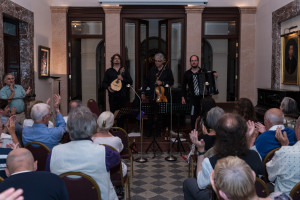 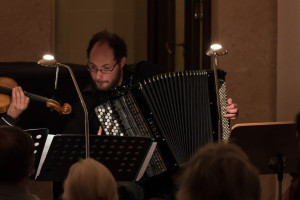 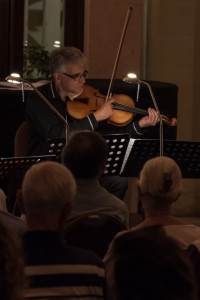 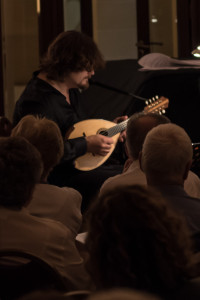