A chamber ensemble comprised of flute and guitar is as rare as they come; when they do come it is special.  Such was the duo Fiorella Camilleri (Flute) and Pierre Bibault (Guitar) when they performed in the exquisitely newly-refurbished courtyard of the Bishop’s Curia in Victoria.

There was an aura of elegance and refinement that prevailed throughout the performance.  Fiorella can exact the minutest dynamic detail on the flute, while Pierre proved to be a most sensitive and accomplished performer on the guitar.  The result was a duo recital blending proportion with style.

The concert started with Garcia Lorca’s beautiful Trece Canciones Espanolas Antiguas, a song cycle made up of no fewer than 13 poems by the great poet himself.  Few in the audience were aware that Lorca was also an accomplished composer in his own right, as the evening’s chosen piece confirmed.  Originally for voice and guitar, the flute substituted the voice for the concert.

All 13 short songs display the inimitable Spanish flavour.  For instance, ‘El café de Chinitas’, is a song taught to Lorca by his great uncle, who earned his living playing in this flamenco nightclub in Málaga. The song’s protagonist brags that he is a better bullfighter and Gypsy than his brother and will kill the bull before four-thirty.  The open-ended harmony (dominant) that ended all the song’s phrases and verses seemed fitting in that we never find out what happens in the bullfight, but it is actually a typical practice in Spanish folk song, as in ‘Romance de Don Boyso’. Here, with distinctive melodic leaps of a fourth, we heard the story of a Spanish nobleman who finds a Christian girl held captive by the Moors, who turns out to be Rosalinda, his long-lost sister.  ‘Nana de Sevilla’ falls into the category of unsettling lullabies that Lorca mentioned in his famous lecture, since it tells of a baby, abandoned by its Gypsy mother, whose father may or may not build it a cradle.

Lorca often performed his best-remembered song ‘Anda, jaleo’ (Come, clap hands, or “have a good time,” or “make a commotion”) in his lectures and in his play La zapatera prodigiosa.  La Argentinita made “Ande, jaleo” a dramatic popular dance when she toured in the 1930s and ’40s; she once called it a “romance of the smugglers of the nineteenth century” and a dance about “the cavaliers of the Sierra in their fights, loves, and adieus.” Fit with explosive lyrics, it became a powerful resistance song during the Spanish Civil War, then after Franco’s time it resurfaced as a flamenco number.  With its repeating bass line and jaunty rhythms, together with Lorca’s occasionally piquant harmonic inflections, the folk version spoke of a hunter tracking down his beloved who had been taken away, and of the conflict between shooting to kill a dove (symbolic of her if she had been unfaithful) and the pain it would cause him.  For ‘Zorongo’ Lorca took sensual Andalusian dance music, said to date back to the Moors, and fitted it with his own verses for La Argentinita to sing; he also imbued his guitar introduction with a plethora of parallel chords. The music’s quickly repeating patterns mingled with slowing phrases have made it a popular addition to flamenco tradition.

The fifteenth-century‘La morillas de Jaén’ (The Three Moorish Girls of Jaén) unfolded with a simple chordal accompaniment and characteristic melodic ornaments. Its patterned introduction and interludes in 3/8 meter contrasted with the tune itself, which mixed 6/8, 4/4, and 2/4 to reflect the declamatory style of the text. The vivacious ‘Sevillanas del Siglo XVIII’ (Sevillanas of the Eighteenth Century) took its name from the fast, triple meter, major-mode couples dance from Seville, which originated as an Andalusian variant of the Castilian seguidilla. The dance is typically performed to a traditional type of verses of four or seven lines with footwork reflecting the animated rhythms of the guitar, castanet, or tambourine.  Triana and La Macarena in the poem refer to neighbourhoods in Seville, Triana being associated in particular with flamenco.  ‘La Tarara’ was performed as a free-spirited, dancing, flirting girl (some say alma gitano or Gypsy soul) who likes to wear all manner of crazy clothing—some versions have her wearing pants completely covered in buttons or a white dress on Maundy Thursday in addition to the verses with frills and bells.

Manuel de Falla’s selection from his famous Siete Canziones Popolares came next. The style of these four chosen songs betrayed the unmistakable de Falla hallmark of complex rhythms, passionate melodic lines and impressionist harmonies.  Asturiana is endowed by a romantic, popular-national tone.  The singer laments that she needs to be consoled.  She goes to sit under the green pine tree and the only consolation the tree offers her is that it weeps with her.  This image brings up a whole range of literary references from the Psalms (super flumina Babylonis) to Shakespeare (Desdemona’s Willow Song in Othello) to Eliot (Marina).  Rather than lamenting the loss of a loved one the poet here is regretting lost innocence in the wake of experience.  The accompaniment was characterised by a beautiful melody in the left hand, with the right hand providing harmonic support by technically demanding octave passages.  With Nana, which in the song cycle appears as the 5th song, de Falla is back to the dreamy, ethereal mood of Asturiana.  He etches a miniature lullaby in half-hued tones and misty shades.  Canción (Popular song) is just what its title says, a folk song virtually unchanged by de Falla.  The finale, called Polo, is a brilliant Gypsy song, again with guitar-like accompaniment.

Bartók’s Romanian Dances followed.  A champion of Hungarian folk music, apart from being one of the gigantic figures in the history of music, Bartók composed his Romanian Dances originally for pianoforte solo.  These Dances are based on seven Romanian tunes from Transylvania, originally played on fiddle or shepherd’s flute.  The first of the seven dances, Stick Dance, was played at a leisurely tempo, and although the general pacing was lively, the music had a restrained quality.  The theme is attractive and Bartók’s approach is straightforward in presenting the ethnic elements, as it is throughout the set.  The second dance, entitled Round Dance, less than a minute in duration, was playful and subtle.  The next, In One Spot, was endowed with much colour by both performers in its mysterious character, having an exotic upper-register melody with all the flavour and allure of Gypsy music while the fourth one, the Horn Dance, was wistful in nature and bordered on the reflective, although it remained essentially light and endowed with different hues dynamically.  The ensuing Romanian Polka was lively and fiery, while the last two dances are both entitled Short and Sweet.  The first was, indeed, quite short and the closing number, although longer, lasted less than a minute.  Both came across as rollicking, joyous dances whose celebration perfectly capped this kaleidoscopic set of folk-inspired pieces which were beautifully performed.

In Villa-Lobos’ Distribuição de flores the guitar is used almost as a percussion – instrument, and the melody, with its pan-flutelike scales, carried reminders of pentatonic and Phrygian tonality.  Very different in character was Takemitsu’s Towards the Sea, a piece containing an almost mystical aura.  Cast in three discrete movements, most of the work is written in free time, with no bar lines.  Throughout, the flute had the primary melodic line, based in part on a motif spelling “sea” in German musical notation: E♭, E, A.  The last work on this delightful programme was Piazzolla’s Bordel and Café (from Histoire du Tango).  With these two concluding pieces, it was difficult to remain indifferent and inert; the performance was a feverish, exciting, compelling calling for the soul and the heart; in which Piazzolla never failed to excel.

A truly refined performance by Fiorella and Pierre! 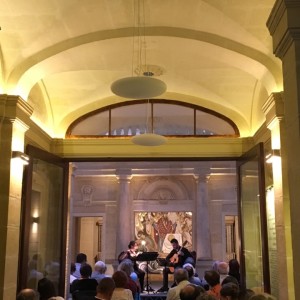