It’s a countdown to Malta’s greatest show!  In a few hours, the Malta Philharmonic Orchestra will be tuning to set the ball rolling on what promises to be an extraordinary spectacle and audicle (if I may be permitted to coin a word) that will resonate all over Victoria for five long weeks, and in the memory for as long as we allow it to!

Right now it’s bristling with customary energy at St George’s Basilica, where the inaugural concert will take place. Our young, dynamic helpers (George, James, Malcolm, Anthony, George Frans, to mention but a few) are very busy laying out the orchestra stands, platforms and a temporary watering hole in the cloister where we all hope to chill out deservedly after the concert.

The Malta Philharmonic Orchestra will be rehearsing briefly a couple of hours before the concert, in order to get acclimatised to the acoustics in the Basilica. Dejan will be tuning up and patrons will be flocking to the venue in anticipation.

Make sure you’re there!!! It’s not going to repeat itself very easily or too frequently. Remember, also, like the best things in life it’s free!!! 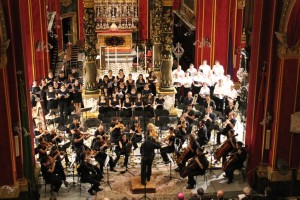