For the eighth consecutive year, the organisers of the Victoria International Arts Festival have welcomed extraordinary musicians from Norway, winners of the Norwegian Competition for Youth. As happens with Upper Austria, Norway awards the first-prize winners with a concert in our Festival and this year it was the turn of Edvard Edral on the violin, Stinius Maurstad on the viola and Bjoern Oskar Sanders on the violoncello.  A formidable trio of young men, they immediately struck a wonderful rapport with the audience, performing in knickerbockers and fur boots.  In this weather, it takes some stamina to play in instrument shod in fur, but it takes all sorts …

Stinius joked with the audience and set a mood of fun which betrayed the seriousness and sobriety when it came to music-making. Starting with Beethoven’s Trio in Eb Major, Sofa Trio, as they call themselves, injected a strong dose of determination in their interpretation.  Robust textures, superb phrasing and crystalline tones marked the performance of this work.

Choosing to play the first, second and last movement, the first movement, an Allegro con brio in sonata form, is arguably the most interesting of the entire Trio. A lengthy, adventurous transition modulates to the dominant for a sweeping secondary theme, at which point Beethoven thins the texture to a duet between the violin and cello.  After one of Beethoven’s most extended development sections of his works before the Op.18 quartets, the recapitulation resolves all of the secondary material to the tonic.  In sonata form with a brief development, the Andante second movement is filled with fascinating interplay among the three instruments, all of which spend nearly equal time presenting the tiny four-note motive that provides the rhythmic and melodic bases of the movement. Sofa Trio maintained an exquisite balance here, displaying a refined sensitivity and awareness with regard to melodic interest. The finale, a blazing Rondo in 2/4, contains slightly varied returns of the main theme alternating with episodes that explore distant harmonies and offer contrasting rhythms.  More than in the Trio‘s other movements, the violin comes to the foreground.

The second and last work on the programme was von Dohnanyi’s Serenade in C Major.  Again, Sofa opted to leave out the 3rd movement of this big work.  The work opens with a march, dominated at first by the vigorous rhythmic figure with which it opens.  It moves on, before long, to a gentler mood, with a suggestion of the Hungarian about it, although Dohnányi never attempted to draw overt inspiration, as Bartók and Kodály did, from the folk-music of Hungary and surrounding regions.  The opening motif appears again only briefly in the last five bars.  The viola presents the principal theme of the second movement, a Romanza, over plucked offbeat chords from the other two instruments, and goes on to provide an arpeggiated accompaniment to the more turbulent central section of the movement, before the violin brings back the principal theme once more.  The Serenade ends with an energetic Rondo, driven forward by the rapid main theme, which frames contrasting episodes, before elements of earlier movements are recalled in a final coda.

It was an evening of great fun, great music performed in a great atmosphere! 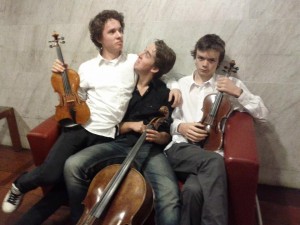